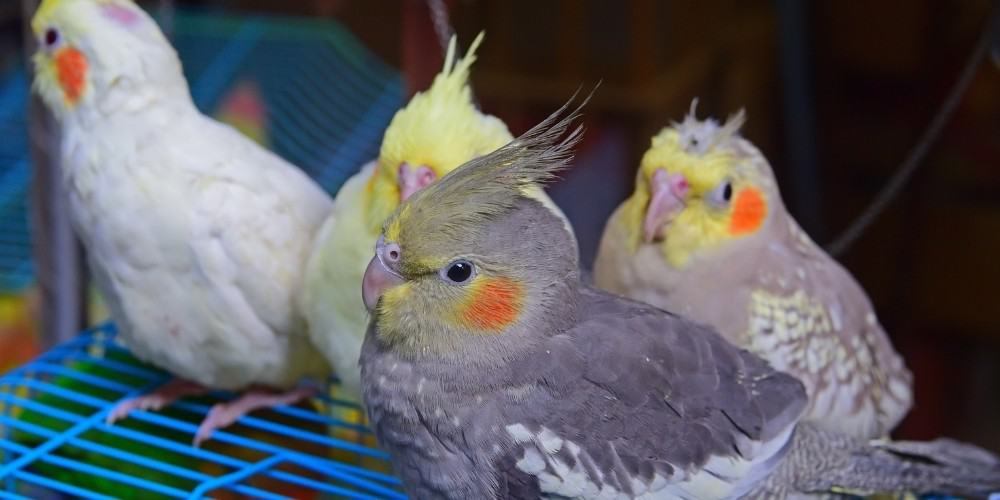 The many bold and beautiful color varieties that we can observe in the cockatiel world all stem from the wild gray cockatiel.

Decades of breeding and domesticating this wild base coloring of gray and yellow with a distinctive orange blush have led to fascinating alterations in a cockatiels genetic code, from its plumage to its eye color.

Perhaps you are considering breeding cockatiels or simply wish to peruse the costs and characteristics of your preferred cockatiel color.

Whatever your interest in their colors and varieties, read on.

We’ll take a look at how cockatiel color genes work, plus how and when some of the most popular tiel color mutations were first discovered.

How Many Types of Cockatiels Are There?

Conservatively, there are at least nine major types of cockatiels, and due to genetic mutations found within these types and widespread cross breeding, there are many color variations and possibilities that result from each major classification.

Since new colorings are being discovered by advanced cockatiel breeders all the time, this can add to the confusion as to the exact number of types.

However, even the rarest cockatiel pattern or color combo can be traced back to one or a combination of the following nine types:

We’ll discuss these in detail further on, along with other less-common color variations.

These nine main types are caused by the inheritance of dominant and recessive genes as well as sexually determined characteristics – i.e. males and females displaying different color patterns from each other upon reaching sexual maturity.

The major cockatiel color groups can be categorized as follows:

Quick Interview With an Expert

Intrigued by the gorgeous color possibilities and patterns, I reached out to parrot expert Dallas at Exotic Pet Birds Inc. with three main questions.

For brevity’s sake, her answered are paraphrased.

Question #1: What colors do you think might be possible in the future?

I think we’ve already seen all the possible colors. For instance, I don’t believe we’ll ever have a true blue or pink cockatiel show up as it’s just not within their genetic coding.

However, I do think that another pattern or combination of patterns is certainly possible in the future.

Question #2: Do you feel that some of the gorgeous mutations we have today would have eventually occurred in the wild?

Yes, eventually. You see, cockatiels naturally select a mate largely based on appearance, so flashier or really pretty birds would likely be chosen as a partner, and eventually, the colors and patterns we enjoy today would have popped up without any human interference.

Question #3: Do any of the color varieties display different behavior or is only feather color affected?

If you have two somewhat aggressive or timid parents, you may find that their offspring are like that too. Same thing goes for really affectionate parents and their offspring.

What Is a Color Mutation?

A color mutation essentially refers to an animal exhibiting a different coloring than you would typically find in the wild.

So in bird terms, color mutations are when feather coloring differs from their wild presentation.

These color mutations arise due to genetic mistakes and the deliberate breeding of two birds with different feather color codes in their genes.

Commonly, color mutations in cockatiels are sexually dimorphic, meaning some male and female cockatiels will display different feather coloring after their first molt (around 8 months old), despite sharing identical feathering as juveniles.

The dominant gray gene determined the normal gray pigmentation in their offspring in this case.

But some of the resulting offspring would be “split,” which essentially means they will now carry genes for both normal and mutation coloring.

Assuming a “split” cockatiel chick is the father in the example below, mating with a normal could result in all cinnamon-colored offspring – despite his normal gray coloring – due to his inherited mutation.

Wild gray or “normal gray” cockatiels were originally discovered in their native Australia (then, New Holland) by Scottish writer and naturalist Robert Kerr in 1793 and named Pssitacus Hollandicus.

Though gray cockatiels became captive after being exported to Europe in the early 1800s, it wasn’t until 1949 that the first mutations of the gray began appearing.

As gray is a dominant color in cockatiel genes, these tend to be the type you commonly find in pet stores and can cost between $50-$80 or possibly less if you buy direct from a breeder.

They have gray or light-gray bodies, white stripes on each wing, yellow heads and crests, and a distinctive orange spot on their cheeks.

Females have duller cheek patches and yellow markings on their tail underside.

There are around 50 primary color mutations of the normal gray cockatiel and considerably more when you combine each of these mutations with each other.

The dominant pastel-face mutation was originally developed by Bob Crossley from the UK in 1989 and came about when two normal white-faced grays produced a clutch containing a baby with remarkably lighter, diluted coloring.

In place of rich yellow and orange, Crossley described the mutation’s face and head coloring as “pale lemon with pale peach cheeks.”

First discovered in a pet shop by Terry Cole of the UK in 1979, the dominant silver mutation can be tricky to distinguish since they come in single (darker) and double (lighter) strengths of silver, depending on the inherited genes – but this makes for a beautiful light and shade spectrum.

Both double and single form dominant silvers can be identified by their dark eyes, dark feet and beak (after the first molt), dark skullcap, and a dark edging on their flight feathers.

They are uncommon and can cost vary depending on their form.

First appearing in New Zealand in 1950, recessive silver cockatiels are caused by multiple genes that affect the gray coloration and display a warmer hue than dominant silvers, similar to the normal grays.

The RS mutation shares similar face and cheek coloring with normals, though they have red eyes due to a lack of melanin in their pigmentation.

Like dominant silvers, the RS mutation comes in single and double forms, which can affect its rarity.

This mutation was first developed in Australia around 2001.

The overproduction of yellow pigment (lipochromes) in its genetic makeup leads to the entire face being yellow, replacing the normally orange cheek patches.

Yellow-face cockatiels retain gray bodies, which can darken or lighten across their subvarieties.

Yellow-face is a fairly common mutation.

Originally discovered in Florida in 1958, the striking lutino mutation is caused by a complete lack of melanin in their plumage and eyes, creating red eyes and colors ranging from pure white to buttercup yellow, with their yellow face and cheek patch unaffected.

This can give some the appearance of an “albino” cockatiel, although there is no such thing.

Along with pied, pearl, and cinnamons, lutino was one of the first nondominant color mutations to occur.

Lutino cockatiels can be considered quite rare depending on their subvarieties.

First appearing in Holland in 1969 before being imported to the US by American aviculturist Dale Thompson, the white-face mutation (as its name suggests) replaces the usual orange and yellow facial coloring with solid white.

This is caused by a lipochrome (yellow pigment) deletion in their genetic code, as they retain a gray body with pale gray crest, beak, and lighter feet.

As a considerably rare mutation, white-face cockatiels can typically cost up to $300 (but can be more expensive since disreputable sellers attempt to label them “Albinos”).

Discovered in West Germany around 1967, pearl is a fairly common, yet distinctive, color mutation.

Each individual feather of the body, wings, and head carries a beautiful lacy, speckling detail caused by a decrease in melanin, resulting in iridescent patches or “pearls” in the gray plumage.

While females retain this effect, males lose their pearling over time, making females more expensive in some cases.

Costs vary depending on the subvarieties of this mutation.

First discovered in South Africa circa 2000 by Mr. Lester De Kok, the cream-face mutation has since spread around the US and is caused by a significant reduction in yellow and orange pigmentation.

The result is not quite a white-face but a heavily diluted normal gray face, hence “cream.”

This mutation has a light gray body with pale yellow cheek patches and a cream/pale yellow crest.

Pied cockatiels were first observed in California in 1949, and they are one of the most unique color mutations.

Pieds lack pigment in random areas, meaning there is no consistency in the loss of pigmentation, resulting in heavy white/cream patching, light speckles of gray pigment, or “clear” pied (which can appear identical to lutinos, except for brown eye coloring).

Depending on the variety in pigmentation, some pieds can be priced higher than others.

The emerald, or olive color mutation, was discovered in Texas during the mid 1990s and gives cockatiels the appearance of a yellowy-green tint.

The name emerald can be misleading since cockatiels do not carry green pigment.

The effect is caused instead by decreased melanin, leading to yellow mottling of the gray coloring and creating an olive green wash over the body, especially localized to the flight and tail feathers.

The varying degree of olive wash and scalloping detail in many subvarieties make this a considerably rare mutation and will drive prices up.

The fallow mutation was first developed in the 1970s and is often mistaken for cinnamon due to their near-identical brown coloring.

Both the cinnamon and fallow gene in cockatiels alters the dominant gray body coloring to produce a noticeably brown hue.

Telling the two apart comes down to the eye, beak, and feet coloring instead.

Fallows have red eyes due to their lack of melanin, which also results in lighter feet and beak pigmentation.

First observed in Belgium in 1967 by Mr. Van Otterdijk, the cinnamon mutation has a pale dusty-brown body with similar, if slightly paler, facial coloring to normal grays.

Unlike fallows, cinnamons have brown eyes, but the confusion among armchair cockatiel owners comes from the fact their eyes appear red in flash photography.

Cinnamon mutations are considered to be uncommon.

What Is the Rarest Cockatiel Color?

The white-face mutation is considered to be the rarest cockatiel color since it lacks the lipochrome pigmentation responsible for yellow and orange.

This makes it the only cockatiel variety which lacks the orange cheek patch in both the male and female.

Can Cockatiels Be Blue?

Blue cockatiels are a rare color variety thought to have originated from an accidental mutation during breeding.

Blue tiels have white bodies with black markings and blue tips on their tail, wings, and crest. They also lack the cheek patch present in most cockatiels.

What’s the Most Popular Type of Cockatiel?

The most popular cockatiel type is also the most common – the original “normal gray.”

Are Cockatiels the Same as Cockatoos?

Partly. Cockatiels remain a member of the cockatoo family, though they carve out a category of their own under the subfamily name Nympicanae.

Cockatiels descended from the same common ancestor as cockatoos, but cockatoos exist in their subfamily branch, known as Cacatuinae.

In summary, there are nine major types of cockatiels, though the possibilities for unique patterns and coloring can be endless in the tiel world once cross breeding of color mutations comes into play.

We’ve also established that the common and popular gray cockatiel pet is down to a dominant gray gene, which forms the base color palette for all cockatiel varieties and subvarieties since their discovery in the late 18th century.