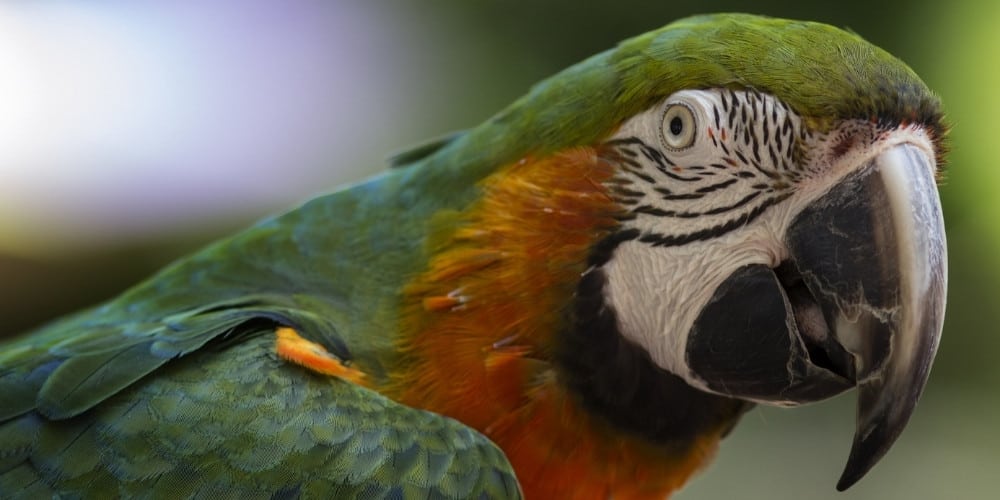 As their name suggests, harlequin macaws have a bright and colorful feather pattern. They are also known for their clown-like but affectionate personalities.

As a hybrid that can only be found in captivity, these beautiful macaws make unique pets for those who can provide them with the proper care.

Are harlequin macaws good pets? A harlequin macaw can be an excellent pet for an owner who is able to provide them with proper care, including socialization, correct diet, ample exercise, checkups, and daily interaction. This blue-and-gold macaw/green-winged macaw cross is typically relaxed and happy with a silly, playful side.

Before committing to adding a harlequin macaw to your family, it is important to know the basics about their care and personalities.

When all their needs are met, these macaws can add endless joy and friendship to a family.

Harlequin Macaws at a Glance

In the following, you’ll learn more about these interesting, strikingly beautiful parrots.

What Is a Harlequin Macaw?

A harlequin macaw is a parrot variety that is bred in captivity and known for its beautiful coloration and fun personality.

These birds only exist as pets because they are not found in the wild.

Harlequin macaws are a cross between a blue and gold macaw and a green-winged macaw.

These full-size macaws are some of the largest parrots. They can weigh 2-3 pounds. Some harlequin macaws have a wingspan of more than 40 inches.

These birds measure 34-40 inches from the beak to the tip of the tail.

Coloration can vary among harlequin macaws. Typically, they have reddish or orange breasts with green and blue on their backs and yellow or gold under the tail.

Harlequin macaws are sometimes mistaken for another hybrid, the catalina macaw, due to their similar coloration.

Harlequin macaw coloration is similar to both of their parents, the green-winged macaw and the blue-and-gold macaw.

In macaws, the father’s genes determine the coloration. If the father of the hybrid was a blue-and-gold macaw, the harlequin will most likely have a reddish-orange breast color.

If the father of the hybrid was a green-winged macaw, the offspring will most likely have a light orange breast color.

Many harlequin macaw owners think their parrots have the perfect blend of personalities from the parents.

With a little bit of both, the harlequin macaw will keep you entertained while still enjoying affectionate moments.

Like most macaws, harlequin macaws have the best temperament when they are hand-reared and socialized from a young age.

A well-socialized parrot will not feel threatened by strangers or become too attached to a single family member.

Socialization will allow the bird to be a fun and engaged member of the family.

All macaws are known for their vocalizations. They can learn to talk, but it is the ear-piercing screams that can be frustrating for first time macaw owners.

Harlequin macaws are no exception, and it should be expected that they will be a very loud pet.

Additionally, they can have cranky periods where they are louder and possibly destructive. This is most common when they are bored or feeling neglected.

Plenty of time to exercise and hang out with their family will help prevent these outbursts.

Harlequin macaws are very intelligent birds. They are capable of learning many behaviors, including talking and mimicking noises.

Training new behaviors is a fun way to keep their mind engaged and to socialize with their owner.

As with many animals of higher intelligence, brains can be a blessing and a curse.

The smart bird that is fun to interact with is also capable of destroying toys or other belongings in the house, learning how to unlock its cage, and recognizing which behaviors get a strong reaction out of their owners (especially a negative reaction).

Toys and activities that allow the harlequin macaw to use its intelligence and problem solve will keep it happier. They do not do well with boredom.

A balanced diet for a macaw is necessary to promote optimal health. Since these birds can live for decades, it is important that their bodies stay as healthy as possible.

Harlequin macaw diets should include pellets, vegetables, fruit, nuts, and seeds. A veterinarian will be able to make additional recommendations based on the needs of each bird.

See our article “What Do Parrots Eat?” for a detailed description of diet recommendations and foods to avoid.

Macaws eat approximately 10-15% of their body weight each day. A kitchen scale can help owners prepare meals for their bird and also loosely track food consumption.

It is best to buy organic produce. If that is not possible, all produce should be thoroughly washed to remove potentially toxic pesticides and herbicides.

In addition to their food, harlequin macaws should always have access to clean water.

If the parrot is a messy eater who likes to dunk their food in their water, multiple bowls should be offered and cleaned throughout the day when necessary.

In a recent conversation I had with team members from Texas Avian and Exotic Hospital, they shared the following feeding tips:

Depending on the breeder, lineage, and amount of hand-rearing involved, harlequin macaws can be purchased for $1,000-5,000.

The purchase price is not the only expense that a potential owner should be aware of though.

All these expenses should be taken into account before deciding to purchase a harlequin macaw.

You’ll find a full break-down of costs involved in macaw care in our article here.

Unfortunately, many of these macaws will end up at a shelter or rescue.

Some owners don’t realize the time and financial commitment needed to properly care for an animal that can outlive its adult owner.

Adopting a harlequin macaw is a more affordable option and an opportunity to provide a home to a bird in need.

As a full-sized macaw, the harlequin macaw can live over 50 years. It is not unheard of for macaws to live upwards of 70 or 80 years with excellent care.

At around age 40, owners might start to notice the signs that their bird has moved into the geriatric portion of its life.

The macaw might slow down, be less active, and have more stiffness in its movements.

Working with such a smart animal can be very rewarding for the owner. Harlequin macaws will learn quickly when given the opportunity to work on new behaviors frequently.

Use a positive reinforcement approach to training.

When teaching your harlequin macaw a new behavior, break it down into smaller steps.

Yes, harlequin macaws are capable of talking. They can learn over 15 words and phrases.

They can be trained to learn different phrases, but some words they might just pick up by hearing them over and over.

The same goes for mimicking common sounds in their environment.

Harlequin macaws are not predisposed to aggressive behavior. They tend to be affectionate and engaging.

However, boredom and lack of socialization can lead macaws to be aggressive towards humans.

To prevent unwanted aggressive behavior, chicks should be hand-reared and introduced to as many people as possible.

Early and frequent socialization will help the macaw to grow up into a social and confident bird that enjoys interacting with humans.

A favorite saying in zoos is “anything with a mouth can bite,” and that is certainly true for harlequin macaws.

Their strong, hooked beaks are capable of delivering a painful bite.

Are Harlequin Macaws Easy To Care For? 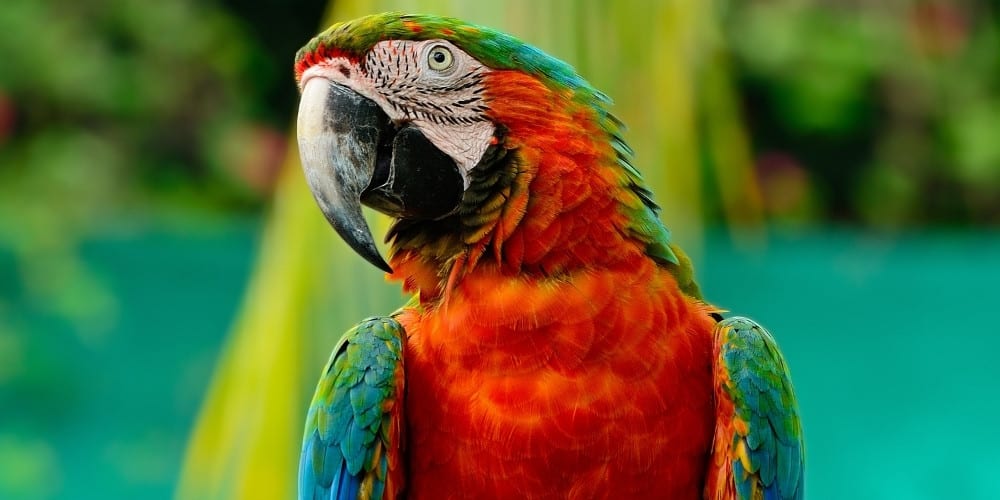 For someone who is experienced in macaw care, harlequin macaws require no more work than other macaw species.

For people who are new to taking care of birds, and macaws in particular, there are a lot of components to take into consideration.

If you have the time and resources, caring for a macaw is manageable and can add a rewarding member to your family.

Macaws are prone to obesity if they are not allowed proper exercise.

Additionally, animals of their intelligence need stimulation to avoid boredom and stereotypical behaviors.

A harlequin macaw should be allowed a minimum of 2-4 hours of supervised play time outside of their cage each day.

The more freedom to play, explore, and interact with people, the better.

Macaws should be given a large cage for overnight housing and for when they need to be put up during the day.

Their cage should be large enough for them to spread their wings and move around. Perching, toys, and enrichment items will keep the bird engaged and active.

Routine veterinary care and yearly checkups will help catch any developing issues before they become a serious concern.

Be aware that any of the following are possible, and share your concerns with your vet.

No bird is perfect. Harlequin owners may find themselves dealing with any of the following at some point.

While harlequin macaws are a hybrid formed from two species, scarlet macaws are considered “true” macaws because they are a species that originated in the wild.

However, wild birds are no longer caught for the pet trade because it is illegal to import them. So just like harlequin macaws, all scarlet macaws sold as pets are born in captivity.

Visually, scarlet macaws have large patches of the primary colors, red, yellow, and blue. A majority of their body is red with single rows of blue and yellow on their wings.

Catalina macaws are 1st generation hybrids, just like harlequin macaws. They are a cross between a scarlet macaw and a blue-and-gold macaw.

Typically, the scarlet macaw is the father so the catalina macaw looks different from a harlequin macaw.

However, when the blue-and-gold macaw is the father, a catalina macaw can look similar to a harlequin macaw.

A major difference between the two hybrids is that catalina macaws typically have a long, tapering tail, which they get from the scarlet macaw parent.

Are Harlequin Macaws Ever Crossed With Other Macaws?

Harlequin macaws are crossed with a number of macaw varieties. Some of the resulting hybrids include:

Is a Harlequin Macaw Right for Me?

Well, it depends. Harlequin macaws can make an excellent pet for the right person or family who is willing and able to provide the bird with the proper care.

The owner must be willing to commit their time and money to create the best environment for their bird.

Also, these macaws can live over 50 years, so it is a lifelong commitment for some owners.

Those that are able to provide the optimal life for their macaw gain a fun and beautiful pet, and the harlequin macaw gains a loving flock mate.

All in all, a harlequin macaw is a beautiful, enchanting bird that has specific requirements for its care.

With the right owner and commitment, this parrot will provide decades of affection and companionship for their family.