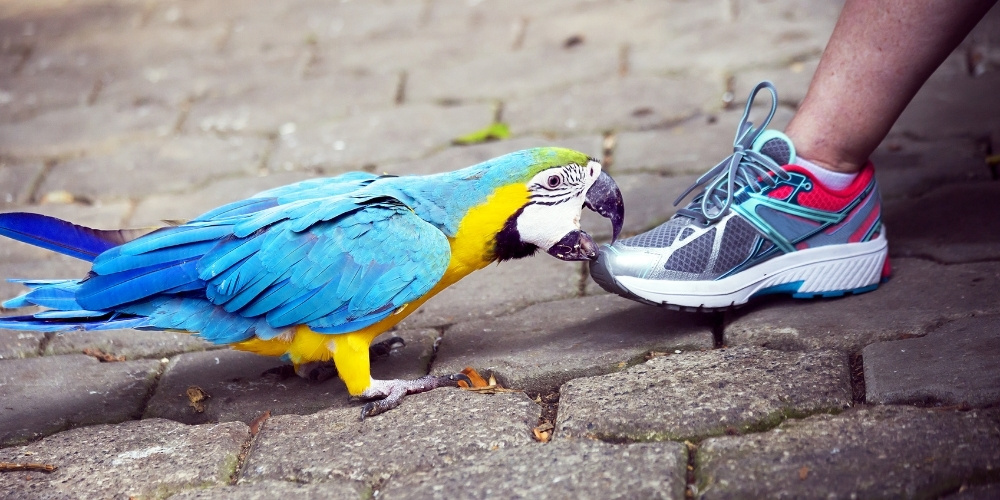 Colorful in plumage and personality, parrots are a joy to be around, but these beloved birds can pose a risk if they have been mistreated or poorly trained.

Their territorial nature and powerful beaks can be a scary combo in the wrong circumstances, so it’s important to understand their potential dangers.

Are parrots dangerous? Parrots are dangerous because they can inflict severe bite wounds that require medical attention and may display aggressive, destructive behaviors when threatened, or even startled – making them unsafe around babies and small children.

They also pose unseen threats in the form of spreading disease and allergy triggers.

If you want to prepare for life with a new parrot, or perhaps get a better understanding of why your current bird can be so aggressive, then read on.

We’ll delve into the dangers a parrot can pose and how to avoid them, plus the cause of their aggression and how to recognize it.

How Parrots Can Be Dangerous & Why

Parrots are wild animals and even when captive and tamed, they retain many traits that enabled them to survive in their native tropical regions, such as biting and displaying aggression in response to a perceived threat.

When dealing with a captive parrot, a “perceived threat” may simply be an unfamiliar person in their company.

Parrots pose many unseen risks as we’ll discuss later, but their main dangers normally stem from the following factors:

Parrots Have A Powerful Bite

Parrots will nip at hair and clothes out of affection, but when it comes to defending themselves, they have a bite force ranging from 300-700 PSI (Pounds Per Square Inch).

Case in point – a 2014 research paper into managing parrot injuries revealed that a 17-year-old man was petting his friend’s parrot when he sustained a fractured finger and a 6cm-deep laceration!

As much as pirate films have you believing the shoulder is the perfect parrot spot, this leaves owners incredibly vulnerable to injury. Proper handling of a parrot means training them to sit on your hand and forearm so they are at a safe distance.

The quicker you train them with the “step-up” command to get them off their perch/cage/ceiling light and safely onto your hand, the safer daily handling becomes.

Parrots are naturally social creatures and instinctively want to be part of the flock, but when they have only socialized with their owner, they can become jealous and territorial around guests and strangers – believing these people are out to “steal” their mate.

Feeling unsafe, parrots may bite, scream, or begin plucking their feathers in an aggressive display.

This can be especially perilous among babies and small children whose cries and unpredictable noises may startle a parrot and provoke violence.

3 Ways to Socialize Your Parrot

Living with a parrot means breathing in the dust created by their constant feather grooming, which doesn’t take long to cover every surface in the home.

Each time they shake their feathers, this too releases dust particles into the air, which may cause moderate to severe reactions in those with asthma and allergies.

This dust can become particularly harmful when contaminated with feces, resulting in Psittacosis or Parrot Fever and an illness known as Bird Fancier’s Lung, both of which can bring about chest pain and flu-like symptoms.

Reducing the amount of parrot dust particles in your home is easily done with weekly cage cleaning and perhaps investing in a HEPA filter that can remove near-microscopic particles with 99.97% efficiency.

No one relishes the thought of receiving a painful, unexpected bite.

During an interview with an employee from Midwest Bird and Exotic Animal Hospital, I asked the following question:

In what situation is a parrot most likely to bite?

Her answer summarized was this:

There’s not really one specific situation that triggers bites. The main reason for parrot biting is fear. This could be as basic as anxiety or run as deep as sheer terror, but the underlying factor is typically fear.

Once parrots approach sexual maturity (between 1 and 4 years), they experience an influx of hormones, and in the same way human teens can be unbearable, your normally loving parrot can become distrustful at best and at worst aggressive and quick to anger, often biting unprovoked.

There’s no solution to this other than to ride it out and handle them less around this period.

Parrots are highly intelligent, curious creatures, and when they aren’t feeling adequately challenged or stimulated by the amount of attention, exercise, or variety of toys in their cage, boredom can manifest in aggression.

Screeching, biting and feather plucking can ensue, so be sure to give them 30 minutes of daily ‘outside cage time’ and as much one-on-one fussing as you can spare.

A parrot’s cage is its comfort and safe space, and if it hasn’t been trained to routinely leave and explore outside using the “step-up” command, it can become deeply territorial and put on a threatening display of screams and feather-ruffling.

This is why early daily socialization is so crucial in helping parrots become familiar with life/people outside their cage.

Parrots that have been rehomed or from rescue shelters may have suffered from abuse and this trauma is not easily forgotten by parrots.

Tragically, their memories of a formerly abusive owner or stressful surroundings stay with them for many years, and this trauma manifests itself in behavioral issues like unprovoked biting and violent feather plucking.

Warning Signs To Watch Out For

A parrots body language can reveal a lot about how receptive they are to being petted or even how safe they feel near you.

So next time you approach them, look out for these signs:

Crouched and swaying – this motion means they are weighing up whether or not to bite. Dilated pupils may also accompany this move as they try to focus on the apparent threat in front of them.

Ruffled body feathers – they will make themselves larger and puffed up to scare potential predators. A cheat sheet for Cockatoo and Cockatiel is a raised crest, which can hint at impending aggression.

Rigid, upright position with flared feathers – this stance communicates that this is their personal space and you’re getting too close for comfort. Approaching them will either result in a bite or a fly-and-hide scenario.

All parrots tend to use deeper-toned chirps in aggression. Cockatiels are known to hiss in anger, while larger species like the African grey tend to cluck and produce a guttural growl when they are fearful and could be ready to bite if approached.

Are Parrots Good Pets for Beginners?

Smaller parrots such as budgies and parakeets make great beginner pets since they are easy to handle and require smaller housing and feeding needs than their larger counterparts.

Any parrot species is a long-term commitment, though the extra costs and complex care of larger birds must be carefully considered beforehand.

Can a Parrot Bite Off Your Finger?

Yes, it is possible for larger parrots, such as macaws, to bite a finger clean off as their bite exerts a tremendous amount of pressure – up to 700 PSI.

Larger species like macaws and cockatoos can easily break finger bones, while smaller species such as cockatiels can break skin.

In summary, parrots are capable of being dangerous due to their beak strength and unpredictable behavior in unfamiliar circumstances.

How they are raised and the attention they receive also plays into how aggressive they can be, but with early socialization training and a thorough cleaning regimen, a parrot’s immediate and hidden health dangers can pose less of a threat.