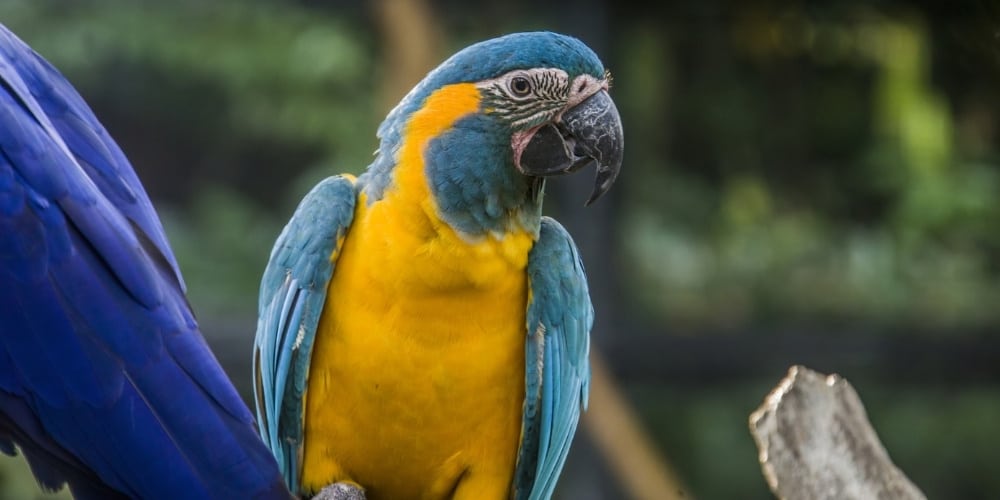 Where Do Blue-Throated Macaws Live?

The blue-throated macaw is native to a tiny region in the north-central of Bolivia called Los Llanos de Moxos. They live in a unique ecosystem called the Beni Savannah.

The area where blue-throated macaws live contains a mosaic of forested islands.

They mainly live in the cavities of the Motacu palm tree. These palm groves are over 500 years old. They also live in totai and royal palms.

Unfortunately, the Beni Savannah has become overgrazed by cattle, burned to improve grassland for cattle, and replanted with exotic species. Thus, their habitat has been minimalized.

The IUCN and another non-profit organization have reserved three tracts of land in the area for endangered species.

This Barba Azul Nature Preserve added a 1.4-million-acre breeding area for blue-throated macaws in 2017 in hopes of helping to increase their numbers.

How Big are Blue-Throated Macaws?

Adult blue-throated macaws can reach up to 34 inches (85 cm) from head to the tip of their tail feathers. Their wingspan is about three feet or almost one meter.

What Do Blue-Throated Macaws Eat?

Blue-throated macaws like to eat palm fruit more than palm nuts. Their favorite nut comes from the Motacu palm.

A wild macaw’s diet is high in fat, so it’s important to mimic their natural intake with the proportion of foods that they eat in captivity.

To ensure they have the nutrients they need, at least 75% of their diet should come from a macaw bird food mix.

The other 25% of their diet should be fresh fruit and vegetables, seeds, and nuts.

Can You Own a Blue-Throated Macaw As a Pet?

Only 50-250 blue-throated macaws exist in their natural habitat.

They have succumbed to predators, nesting competition, habitat loss, native hunters who use their feathers in ritual dances, and the pet trade.

As a result, the IUCN lists them as critically endangered species. Live export of blue-throated macaws has been illegal since 1984.

Blue-throated macaws are much easier to find in captivity, although they are still fairly rare, with only 1000-1100 living in captivity worldwide. Several zoos have started breeding programs to try to increase their numbers.

Blue-throated macaws are available for sale from pet shops and private breeders, so it is possible to own them as a pet.

However, breeders can request special permits to sell blue-throated macaws since they are non-native.

Unfortunately, it is illegal to possess or transport any animal on an endangered species list in several states, so it’s essential to check state-specific laws concerning the ownership of endangered species before deciding on a blue-throated macaw.

How Much Does the Blue-Throated Macaw Cost?

Because they are rare and difficult to obtain, the average cost of blue-throated macaws is between $1,000 and $3,000.

A good-sized birdcage for a blue-throated macaw is around 4.5 feet (1.4 meters) wide but ideally larger.

Blue-throated macaws are also more mechanically minded than other macaws, so an escape-proof lock is necessary.

The cost of owning a macaw doesn’t stop at purchase; it is ongoing. Macaws are very destructive of their toys and need plenty of fresh food.

Thus, the cost of food, supplements, and toys for a blue-throated macaw runs about $95-$140 per month.

Expect to spend $100-$200 per vet visit, and any emergency visit would cost more.