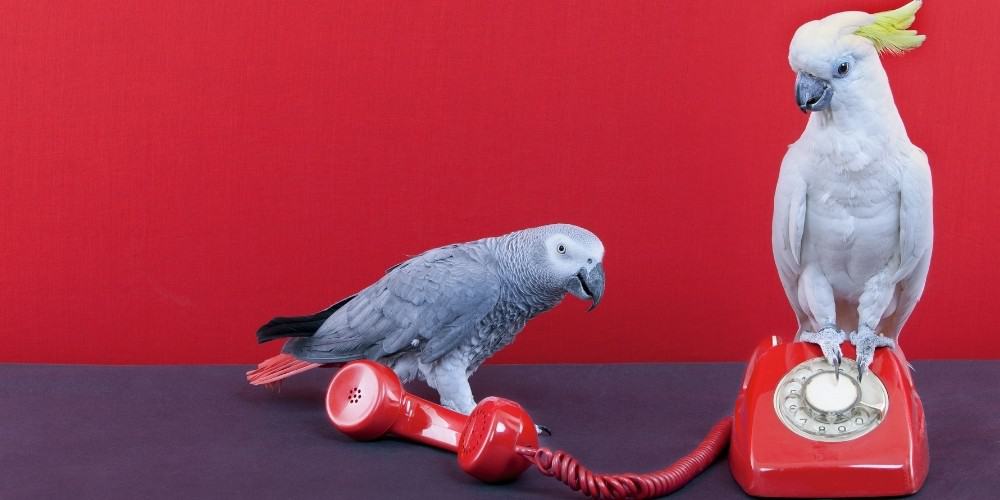 Parrots are intelligent creatures that can learn to mimic various sounds, everything from machinery to other animals to human language.

But do their skills go beyond simple imitation?

Can parrots have a conversation? Parrots can learn to have simple yet meaningful conversations with humans. Though they have a limited vocabulary, they have been seen using the words they learn appropriately and in different situations—showing that they do understand what they are saying at least to some extent.

In this article, you’ll learn what researchers have found in regards to whether parrots can have a conversation with humans and each other and how much human language they can truly understand.

Can Parrots Actually Have a Conversation With Humans?

If parrots are taught to speak human words, they can have a conversation of sorts with us. However, their vocabulary is typically much more limited than ours.

While the average human knows tens of thousands of words, parrot vocabulary is limited to just hundreds of words or phrases.

This means it’s best to keep conversations with your parrot simplistic.

Use words that you know they understand already as opposed to unfamiliar ones, especially with older birds who are less likely to pick up on new language.

Do Parrots Understand What They Say?

Parrots might not always understand what they say, but we do have evidence that they understand and can use human language in various contexts.

A bird named Cosmo (see a fascinating example of her talking abilities here) has been studied by researchers at the University of Georgia and found to communicate with her owner differently depending on context.

For instance, she might say, “Where are you?” when her owner is not in the room, but she won’t use the phrase when she can see her owner.

She also speaks back and forth with her owner in a seemingly true conversational style and even asks to play!

Long-time parrot owner Alicia Hodges, after conducting a language experiment on her parakeets, says this about her parakeet Paris:

He could hold excellent conversations with people, and if he didn’t know the answer, he would go, “hmm….” or “I don’t know.” He could also be very rude if he didn’t get his way and picked up saying things like, “I’m gonna ruin your career!”

Hodges goes on to say:

Paris was very observant and could tell you where you last left your keys, cellphone or hair brush.

This shows that parrots not only hold conversations with their owners, but they understand what they’re saying.

However, a parrot might also mimic sounds without knowing what they mean, especially when first learning language.

Parrots do understand some human speech if they are taught to or if they pick up on it naturally through listening to our conversations.

Think about humans: our parents have to teach us how to speak our native language. We learn as toddlers by listening to others, mimicking sounds, and eventually piecing together sentences.

Your newly adopted parrot might not understand you yet, but one that’s lived with you for decades will have almost certainly picked up some language skills.

The more you talk to your parrot, the more they’ll learn.

Remember, though, that parrots can only memorize a limited number of words. For this reason, they’re unlikely to understand a very complex conversation.

They can hold simple conversations, though. If you teach your parrot a command, such as to go to their cage for bedtime, they can understand and follow that direction.

As many parrot owners will tell you, it’s sometimes the language you don’t want them to learn that they pick up on!

A quick YouTube search will show countless videos of birds cursing at their owners, so watch your mouth and avoid saying things you don’t want your parrot to repeat!

Do Parrots Talk to Each Other?

Parrots do talk to one another, but they typically use their own form of communication. Did you know that parrots must learn to “speak” just like humans?

Unlike some animals that know how to communicate with one another naturally, parrots are taught “language” from other parrots just like we might teach a toddler how to speak.

Parent birds even teach their offspring a certain call that is unique to them, much like humans name their children.

Of course, parrots also communicate through body language. This is how they show other parrots—and humans, if we’re paying attention—how they are feeling.

If two parrots are raised in a human home and taught to speak, they can communicate with one another using human language as well.

They might even use a combination of human and parrot language to speak to one another.

Some parrots will listen to the television and even pick up a few words in a new language from it.

You might notice your bird mimicking often-repeated words and phrases or even sound effects, like the buzzers on a game show.

These intelligent birds pick up on their surroundings well.

If they’ve heard something once, whether from TV, you and your family, or the neighbors yelling outside, they can learn to say it themselves.

This can be fun for parrot owners who wonder where their bird learned certain languages that they weren’t directly taught.

Of course, it can also be annoying if your bird picks up on something you don’t want them to say!

Older parrots can learn new words, but they won’t pick up on a new language as quickly as younger parrots.

Parrot owners report their birds continuing to learn new words all throughout their lifetimes, so you might be in for little surprises here and there if you have an older parrot.

However, parrots tend to pick up on the words and phrases that interests them. So, there’s no guarantee of teaching them something new, especially at an older age.

Regardless, your parrot will enjoy the attention they get from you speaking with them and trying to teach them new words! Just remember to be patient with them.

What Age Does a Parrot Start To Talk?

However, you can expect your parrot to begin learning a language between 3 months and 1 year of age depending on the type of parrot, how much you speak to them, their personality, and their gender.

Generally, males tend to be more vocal than females.

Do Parrots Know Their Names?

In the wild, parrots learn their names—a vocalization unique to them—from their parents.

However, parrots are also capable of learning the name you assign to them and understanding what it means. They will recognize, repeat, and respond to their name easily once learned.

Parrots can have a conversation with humans, though it may be somewhat limited.

While they cannot understand everything, as we’ve discussed, they are much more complex communicators than many people believe.

The aspects of parrot language and learning abilities that researchers have uncovered are fascinating, and we hope to learn more and more about our feathered friends in the future.