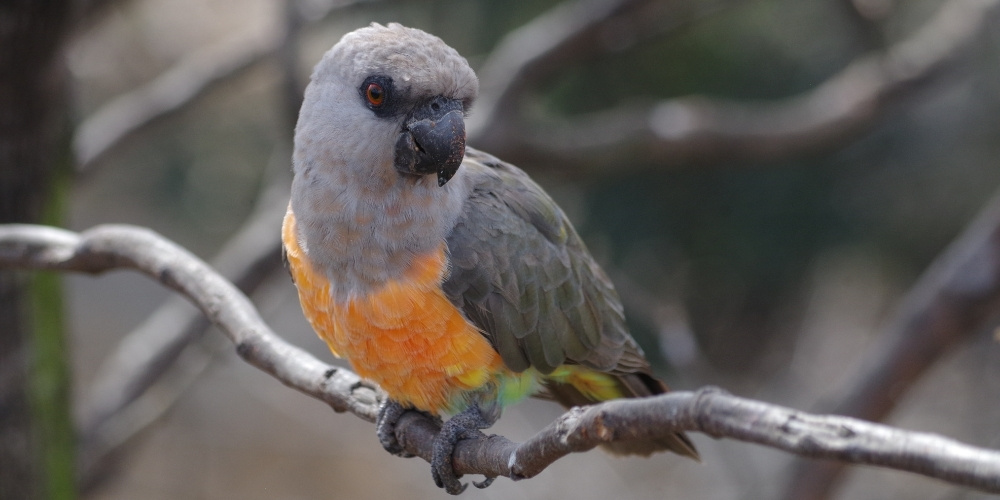 The Red-Bellied Parrot is considered to be the best talkers and most outgoing of the Poicephalus Species.

Their vocabulary can become immense and they are never shy about telling strangers all the words that they know.  (A prime example of why we should only use “good” words around our fids.

Like others in this Order of Parrot, they have an anomalous, but; occasional phobic reaction.  It has never been determined why or what the trigger(s) might be and it is not at all like the “Night Frights” that are so common to Cockatiels and other species.

Sometimes they will just go into a frenzy of fear and then calm down with a little snuggling and soothing from their human family member(s).  It passes quickly and does not harm them as far as has been determined.

They are affectionate and loving companions to humans.  In fact, having two of any Poicephalus, for the purpose of giving them a friend while you are out of the home is really not recommended, although they live in social colonies in the wild, they don’t easily take to their own kind in captivity.

If you give your Red Bellied Parrot plenty of soft wooden toys to chew on and some good acrylic toys (both are a must, because they can be chewed on, tossed, played with and are easy for humans to use for interactive toys.

These two materials will keep your fid from having overgrown or scissor beak, which is quite common to those not having proper beak grooming material. They entertain themselves while alone as much as they enjoy entertaining people.

They are a relatively healthy and robust little bird with a few vulnerabilities making them susceptible to the following:

Their Food:  Their diet should contain a limited seed mix of both small and large seeds, a good pelleted food and MUST be supplemented with a wide variety of fruits and vegetables.

A good diet, fresh air, adequate room to exercise plus a happy environment spells the difference in keeping the birds healthy.

Their cage/house:  Avoid cages with curlicue designs. The curves can snap off under heavy chewing, and Poicephalus parrots have very strong beaks. There have also been cases of tail feathers getting caught in them. It’s also better to get a rectangular or square cage.

Birds need to have a corner they can retreat to when they are scared. Being in a round cage is the equivalent of being trapped in an open field-there’s no where to go, and they’ll always be checking for any signs of “predators”.