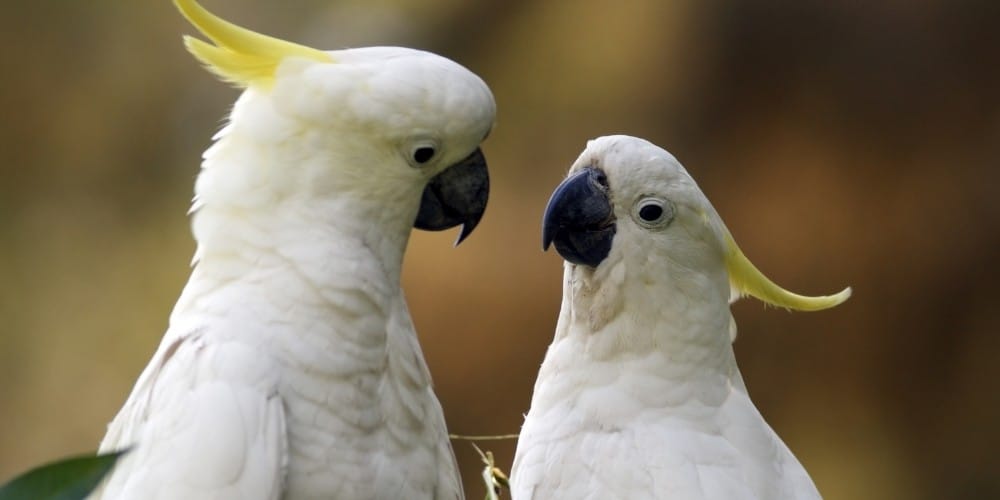 A certain image comes to mind when you think of cockatoos – large, loud birds with white plumage and a glorious crown of feathers fanned above their head.

But these remarkable creatures come in a vast array of shapes, colors, and personalities (some varieties are even quiet by cockatoo standards!).

How many types of cockatoos are there? There are 21 major cockatoo species, with 37 subspecies recognized in this group. Of these 21 species, 14 are native to Australia, with others found in parts of Indonesia, New Zealand, the Philippines, and other neighboring island countries.

I don’t know about you, but I find the bright, colorful cockatoo plumage to be incredible. Curious as to how the various species are faring in the wild, I did some digging.

The following cockatoos are considered to be endangered or threatened.

While loss of habitat does contribute to the decline in numbers, the demand for pets fuels their loss as well.

Please be certain before purchase that your new pet was bred in captivity by a responsible breeder and not snatched from the wild.

Factors such as height, noise level, and temperament can differ among the cockatoo types, so before you fall in love with their presentation and pet-store persona, read about the following cockatoo species to see if their bold nature and needs might mesh with your lifestyle. 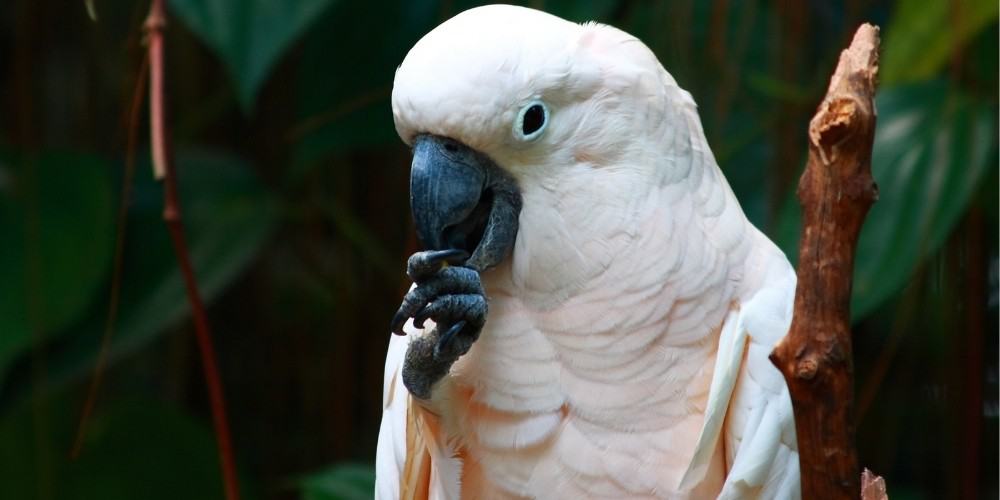 Goffin’s are small, white cockatoos with a short crest and pale gray beak.

They have hints of salmon coloring in their crest feathers and around their neck and beak, and the underside of their wings and tail feathers have a pale yellow tinge.

They also boast a 22-inch wingspan. 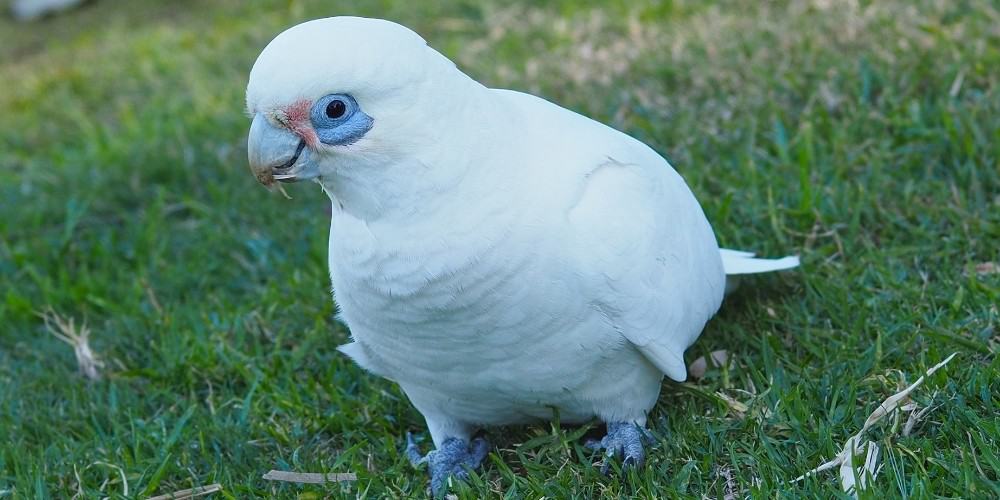 Bare-eyed cockatoos are similar in appearance to Goffin’s.

They are mostly white with a pink tinge around their beak and feature a distinctive blue-gray patch of skin around their deep-set eyes.

They have an impressive wingspan of 24 inches and a short, flat crest. 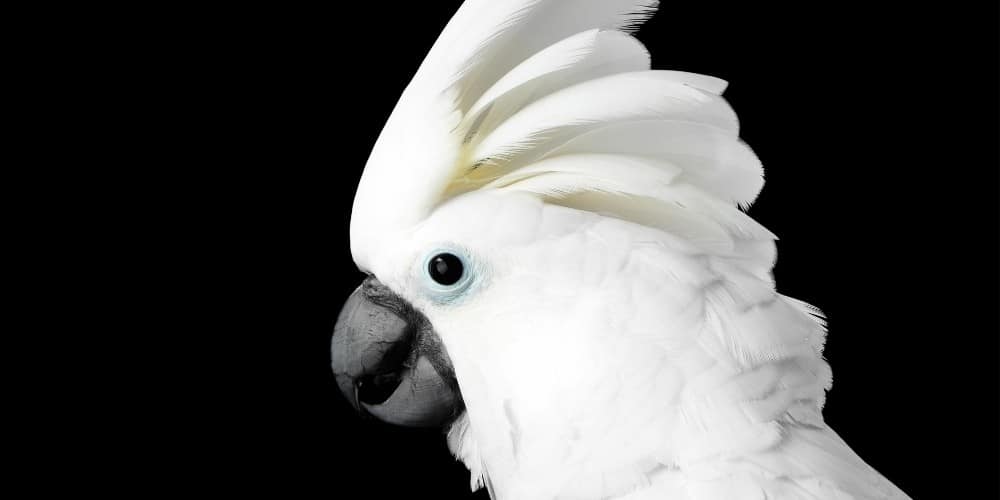 These out-going, medium-sized cockatoos are primarily white with large, white crests that are fanned out “umbrella” like in times of distress or excitement.

Umbrella cockatoos also have pale yellow coloring on the underside of their wings and tail, blue rings around their eyes, and dark gray beaks. 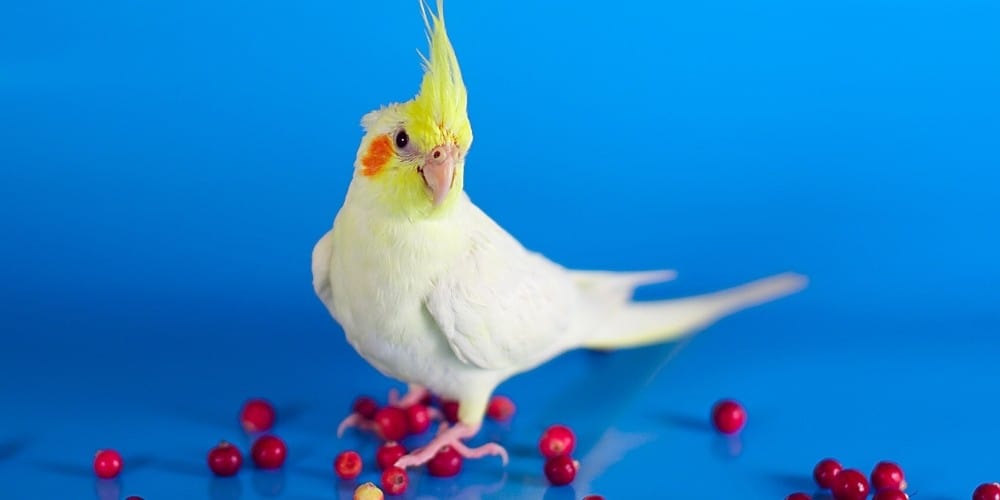 The smallest member of the cockatoo family, cockatiels typically have gray plumage with stripes of white on their wings’ outer edges.

Their distinctive markings are their yellow faces and bright orange ‘blush’ cheek patches. They also have slim crest feathers and pale gray beaks. 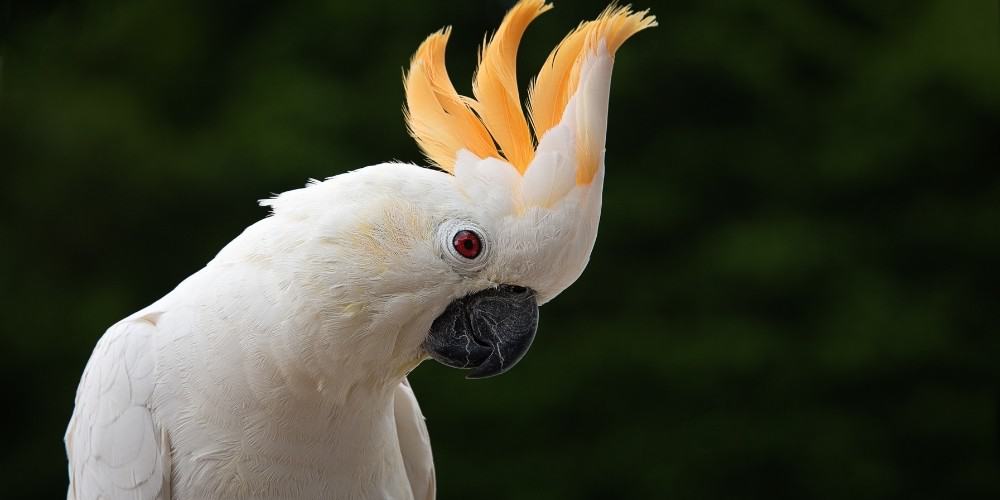 Unlike many yellow-crest cockatoos, the small citron-crested species sports a large, bright orange crest in beautiful contrast to its snowy white plumage.

Citron cockatoos also have a faint orange blush on their cheeks and subtle yellow coloring on the underside of their wings and tail. 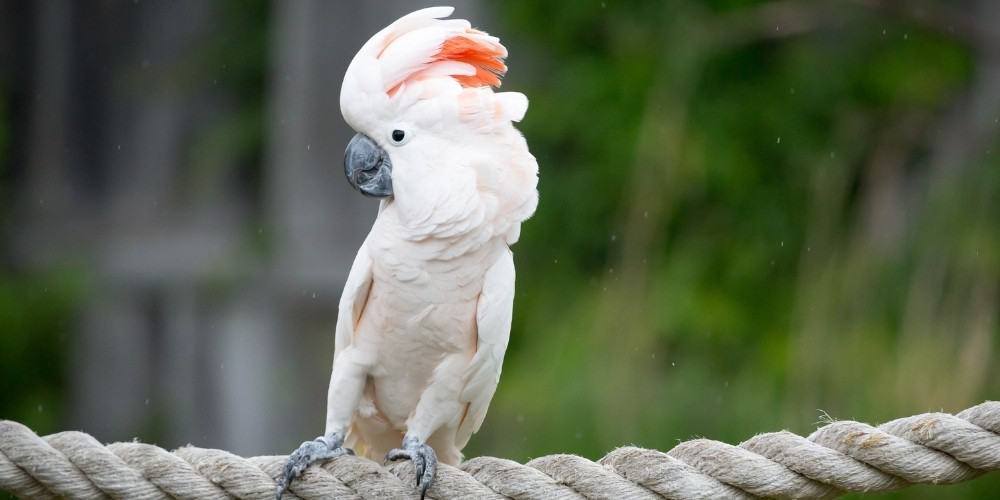 The Moluccan cockatoo is a very large, striking bird that requires plenty of space for love of acrobatics.

It has mostly white plumage but its salmon-pink feathers at the base of its large crest reveal a bright pop of color when raised. Moluccans also have large black beaks and feet. 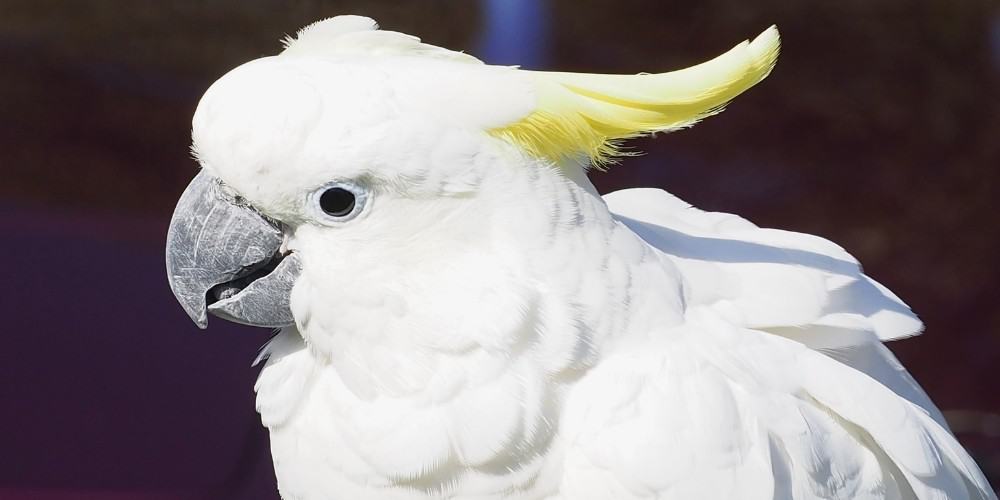 Sulfur-crested cockatoos are large, primarily white birds with a tall yellow crest and a pale lemon wash on the underside of their wings.

Their slim and spaced-out crest feathers give the appearance of a yellow “mohawk,” and they are known for their love of dancing and vocalizations. 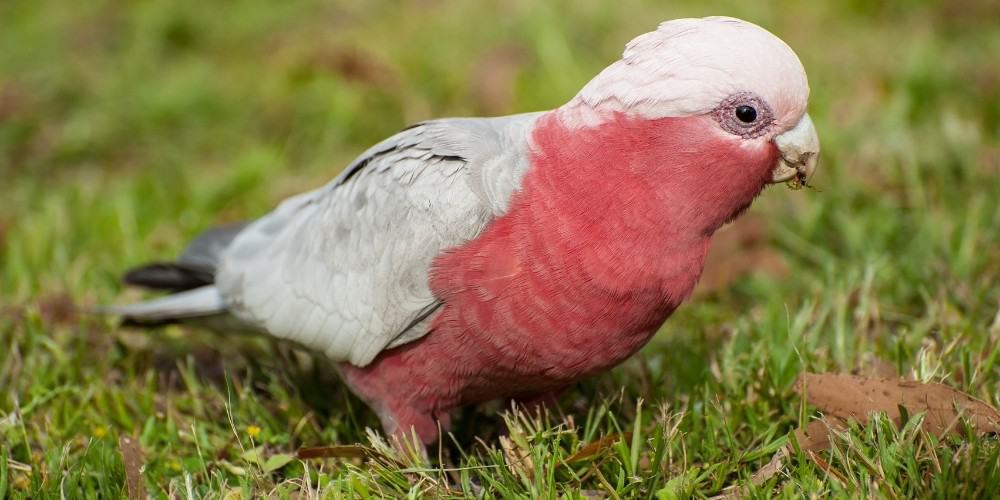 An unusually colored cockatoo, the galah displays a stunning combination of rose-pink and gray plumage. 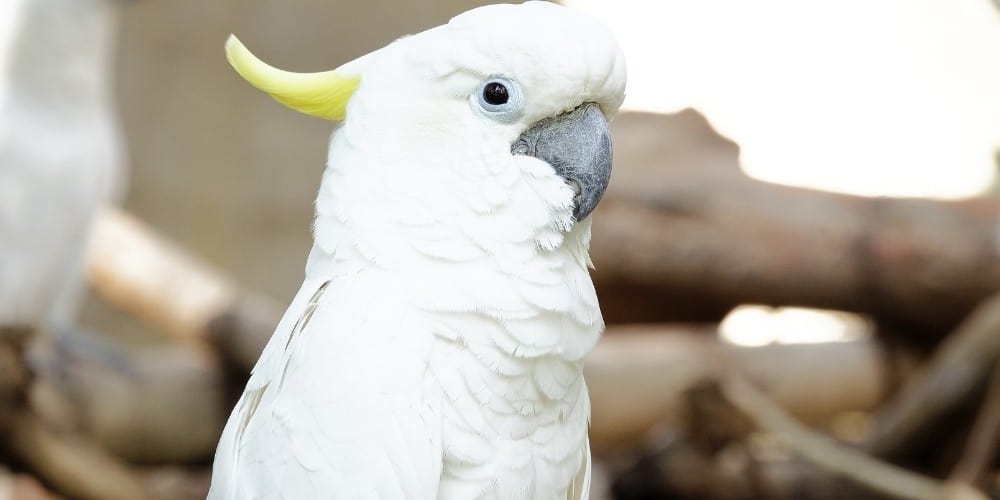 A subspecies of the sulfur-crested cockatoo, the large Triton cockatoo also shares the appearance of a white body and contrasting yellow crest feathers.

It also has pale yellow highlights on the underside of its wings and tail feathers and a distinctive blue ring around the eyes. 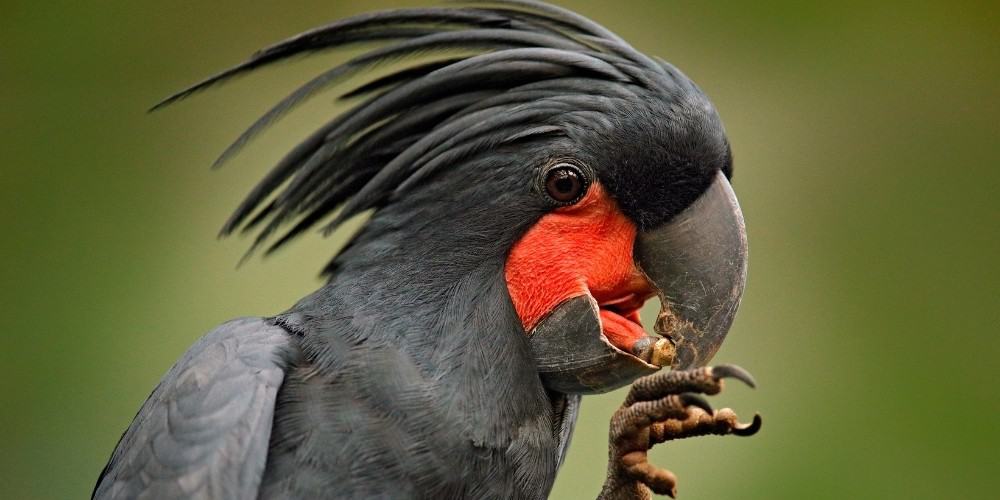 At 24 inches tall, palm cockatoos are the largest birds in the cockatoo family.

Palms have a tall, expressive black crest, and their red cheeks even change color when excited or startled. 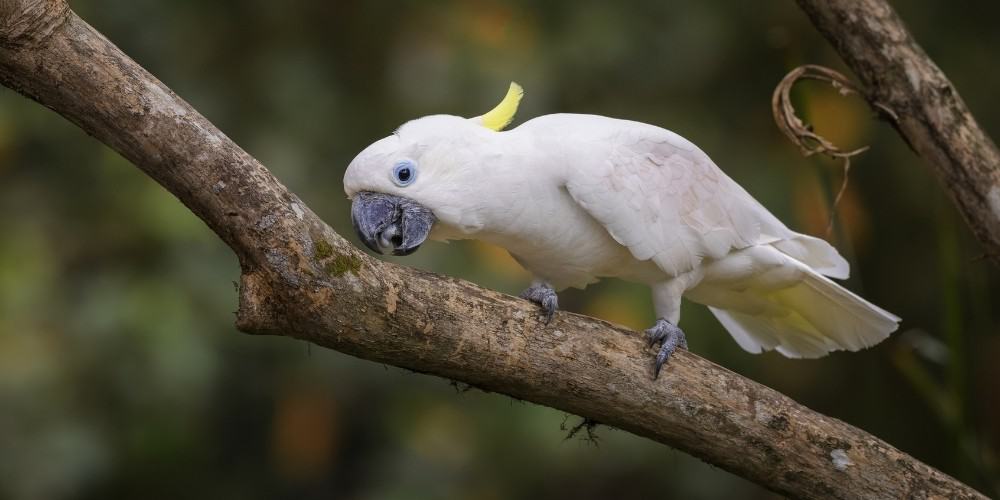 Another subspecies of the sulfur-crested kind, the eleonora cockatoo has a small body of clean white plumage with a tall yellow crest and a bald patch at the base of their crest.

Some eleonora’s have crests as tall as themselves, reaching up to 16 inches when erect. 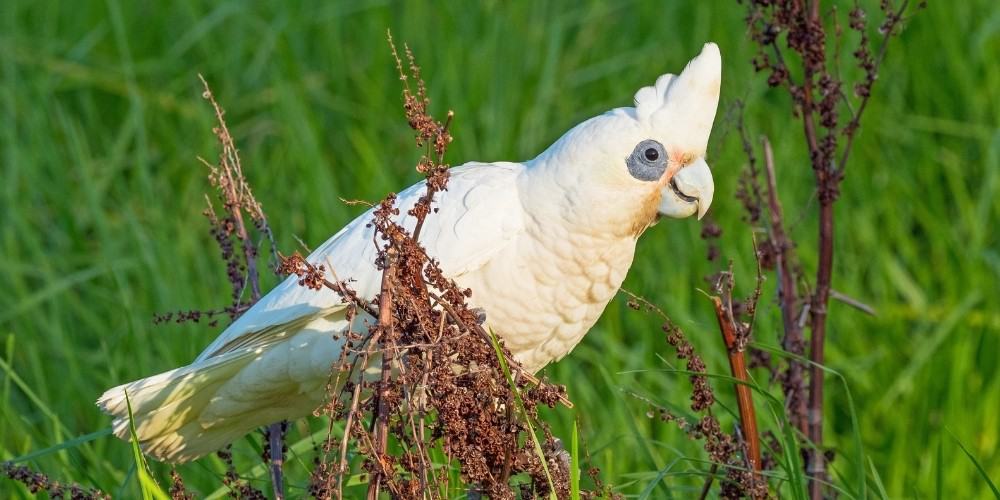 Western corellas are medium-sized cockatoos with white bodies, very short crests, and stark patches of reddish orange at the base of their beak and neck.

Similar to the bare-eyed cockatoo, they also share a distinctive (but darker) patch of blue skin around their eyes.

Before we take a look at more stunningly beautiful cockatoos, here’s a quick fun fact:

Did you know that most cockatoos are left-footed and that the word cockatoo is a Malaysian word meaning “grip”? 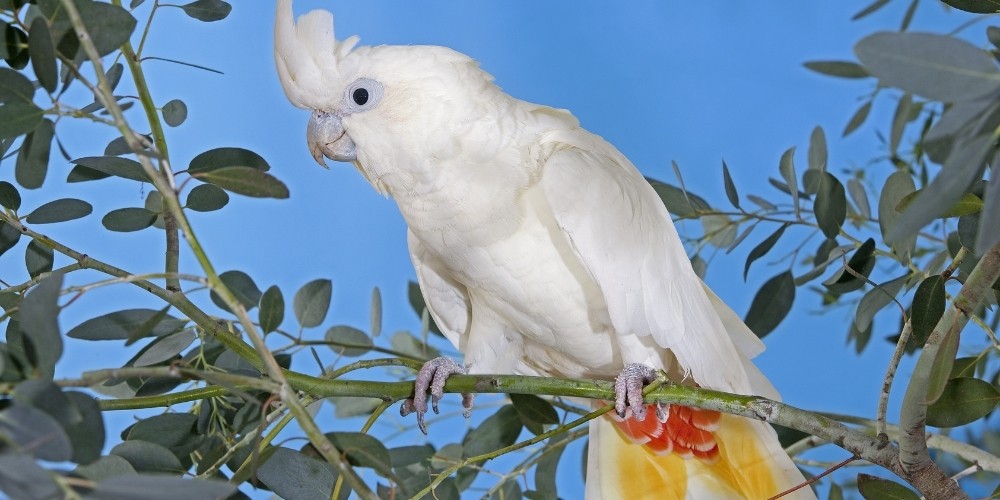 As its name suggests, this beautiful but endangered species has a striking red coloring to its vent feathers (the base of the tail).

Red-vented cockatoos have a pristine white body in stark contrast to their colorful vent, which is also complemented by pale yellow coloring on the tail underside and underwings. 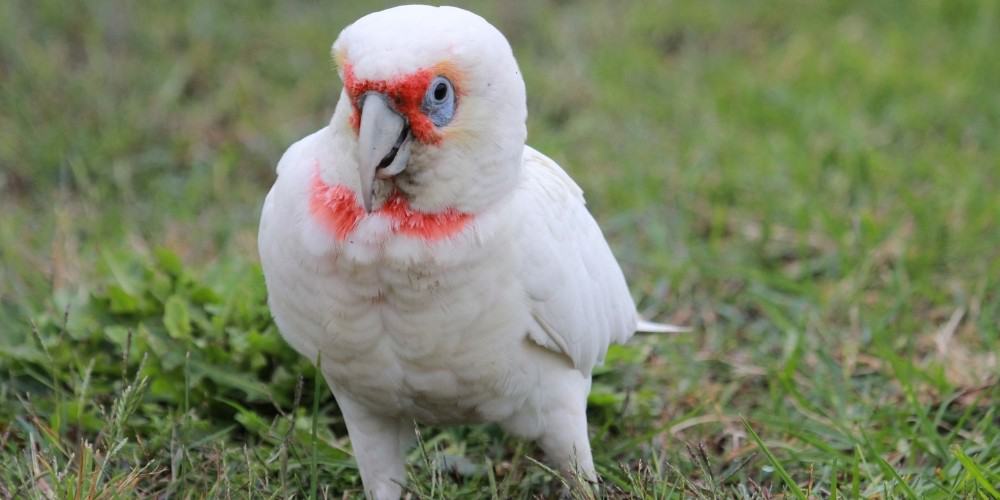 Unlike many cockatoos, this species has a short, barely noticeable crest, but their defining feature is their elongated bill, which allows them to dig up roots and seeds in the wild with ease.

Slender-billed cockatoos also have pink patches on their face and neck with blue skin patches surrounding their eyes. 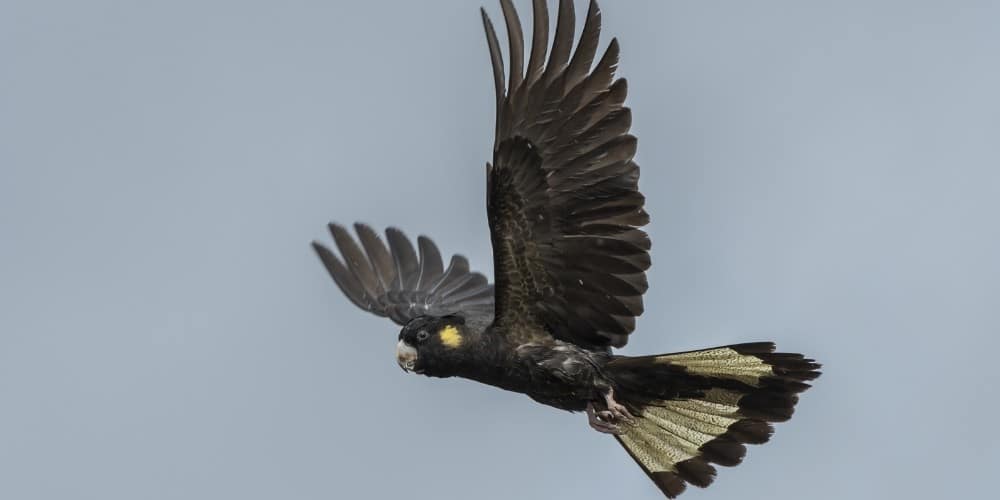 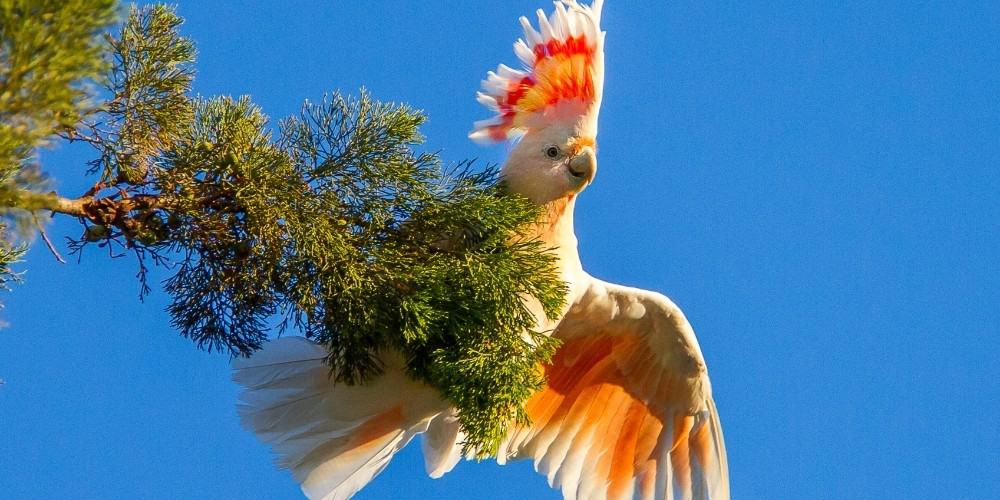 The Major Mitchell’s cockatoo is a stunning medium-sized bird of rich, warm colors.

Their bodies are primarily pale pinkish white, but they throw open their crest, wings, and tail feathers to reveal a palette of fiery reds, oranges, and deep pinks tipped with white – creating the most arresting display. 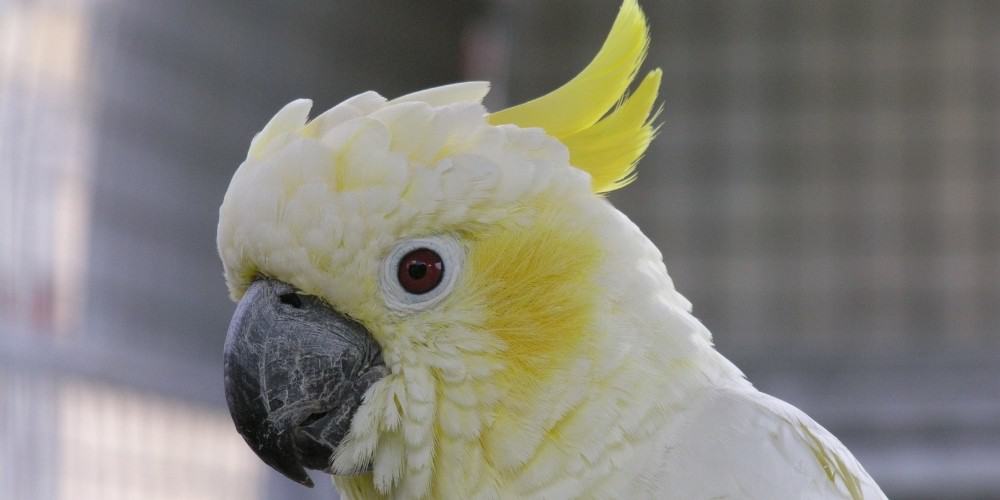 It also displays hints of yellow coloring on the underside of its tail, underwings, and near the ears. It also features an even blue ring around the eyes. 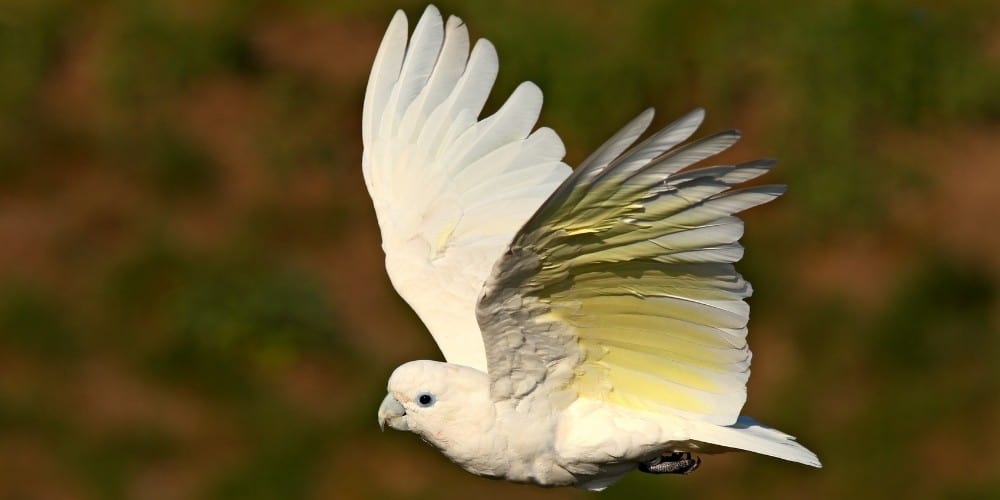 Similar in appearance to Goffin’s cockatoos, Solomons are small in size with predominantly white plumage.

They also have subtle hints of yellow coloring in their underwings and tail and salmon-colored feathers at the base of their short crest.

Solomons cockatoos have a distinct ring of blue-gray skin around their eyes. 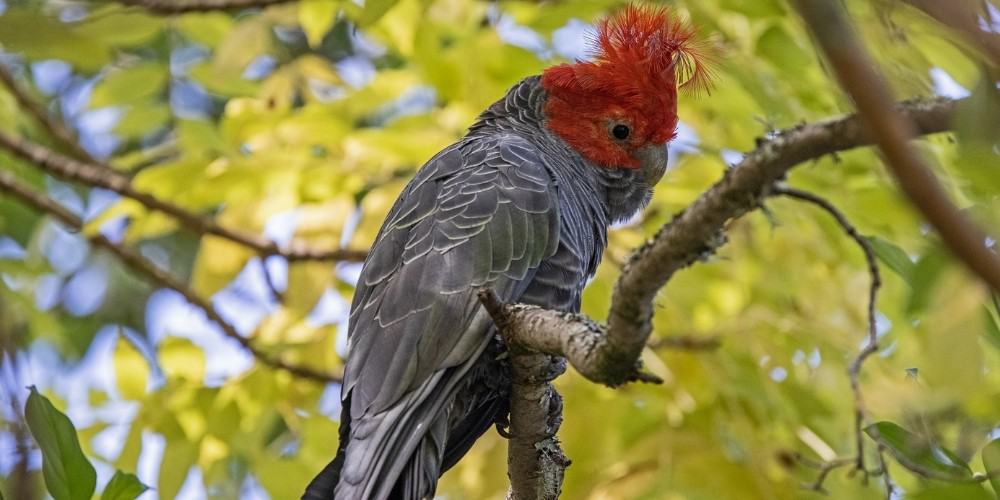 Gang-gang cockatoos have a mostly gray plumage with distinctive contrast of bright red head and crest coloring, though this is only present in males.

Females have a gray crest but have a reddish-brown breast, creating an attractive barring effect. Both sexes display pale-gray underwings and tails. 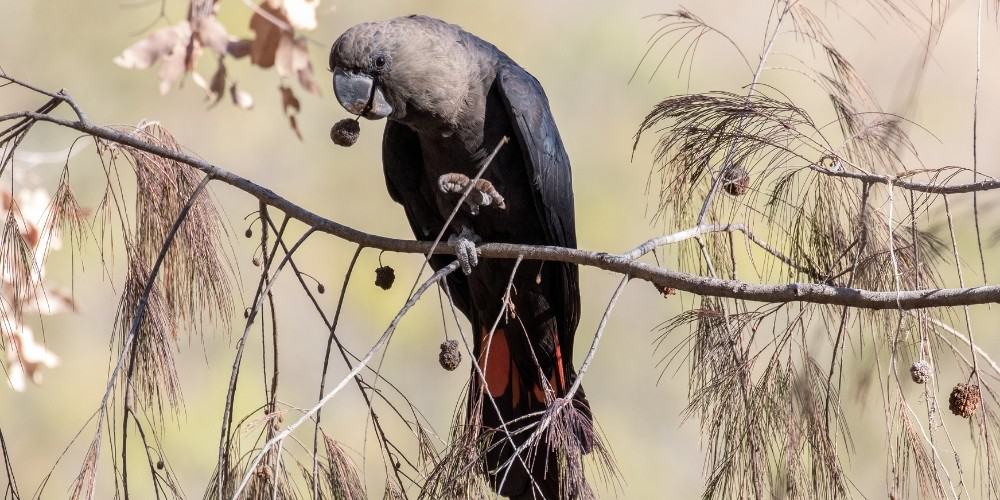 The medium-sized glossy black cockatoo has overall black plumage with a small crest.

Their defining feature is the reddish-orange panels on their tail feathers which mingle with black to create a striking barred effect.

Females have orange tail panels and distinct yellow patches on their head and neck. 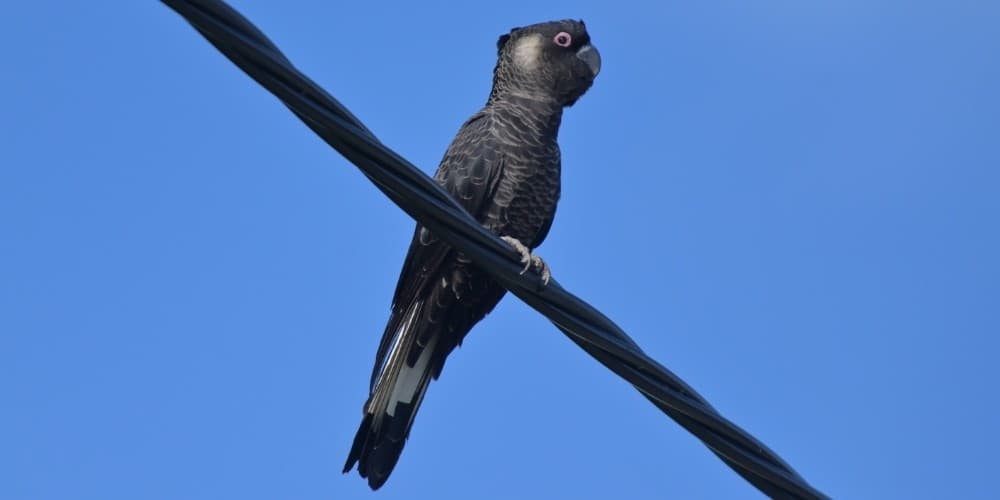 The rare Baudin’s cockatoo has brownish-black plumage, edged with white to create a scalloped effect. Males have dull white ear spots while female ear coverings and beaks are bright white.

What Is the Friendliest Cockatoo?

Umbrella cockatoos are considered to be one of the friendliest types and have a reputation as “cuddle-bugs.”

It’s worth remembering though that every bird’s temperament will depend on their previous care and environment.

Rehomed umbrellas, for instance, are prone to aggressive behaviors out of fear or past trauma.

Which Cockatoos Are the Smartest?

Goffin’s cockatoos are thought to be the smartest and are often subjects of cognition experiments.

A 2013 study involving tracking and uncovering hidden food at the University of Vienna found that Goffin’s spatial reasoning abilities “rivaled those of great apes and human children.”

While their capacity for close bonding can make them affectionate pets, the emotional demands and screaming fits can make cockatoos hard work, particularly for beginners.

Dr. Alicia McLaughlin, DVM, explains it can be, “very difficult to meet the care and socialization needs of most cockatoos.”

In summary, there are 21 major cockatoo species and many more exquisite and uniquely colored varieties grouped within them.

We’ve also established that regardless of how loud or uncharacteristically quiet one type may be, every cockatoo (common or exotic) shares a fundamental need for daily socialization to thrive, behave, and ultimately trust its owner.