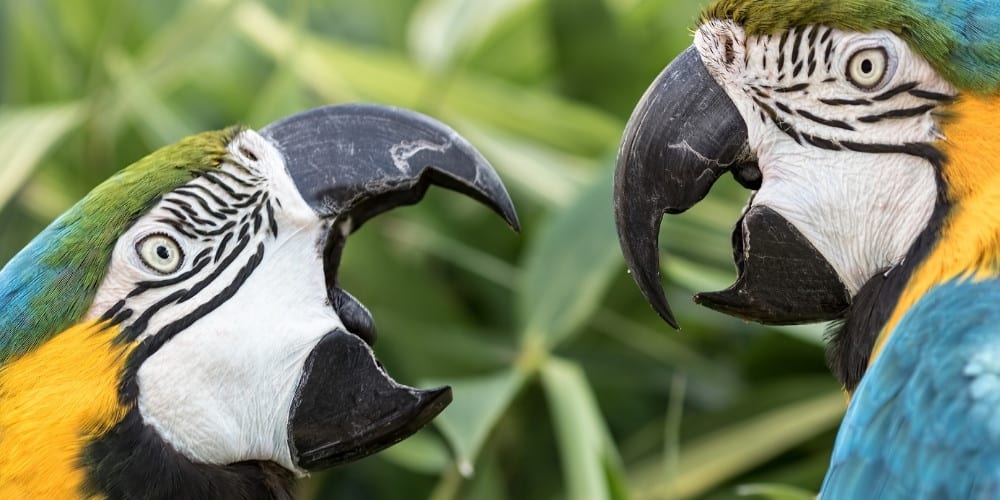 Macaws make funny and affectionate companions, but there’s no denying that these gentle giants could inflict serious damage if they wanted to.

Macaws possess a large and intimidating nutcracker on their face which – in the wrong circumstances – could pose a real danger to handlers.

Do macaws bite? Macaws are not prone to biting, but they are more likely to bite when influenced by environmental agitators and developmental changes. Because captive-bred macaws cannot communicate as they would in the wild, biting is often a last resort form of expression when needs are ignored.

If you have known a macaw to bite, do not be so quick to label them as “problem parrots.”

There are several reasons why a macaw may bite someone, and it’s only by understanding the root causes that more severe bites and aggressive tendencies may be prevented.

Read on to discover a macaw’s bite force, the warning signs, and more.

Parrot owner of 50+ years and Avian Enrichment founder Deb White notes that “biting in captivity is largely a learned behavior” in macaws.

While there are instinctual bites that are also observed in the wild, your caged macaw may ultimately bite to express its needs in what is an unnatural environment for them.

Biting is often a last resort means of communication and not all bites are an intentional “attack.”

Understanding the types of bites and their reasons goes a long way toward recognizing your macaw’s unique sensitivities so that biting may no longer be a recurring issue.

Reasons Why Macaws May Bite

Fearful and pressurizing situations for your macaw, such as forced socialization or being fed and petted by someone other than their main caregiver, can instill a fight-or-flight response, which can provoke them to bite.

As highly empathetic birds, macaws may also pick up on your stress and bite accordingly.

As prey animals, it’s important for a macaw’s emotional well-being that they feel secure in their surroundings, and this means never straying too far from routine and familiarity.

So biting could arise from huge changes (moving to a new house, new cage mate) to seemingly ridiculous triggers (you’ve changed your hairstyle, they’re asked to step-up on the wrong hand, etc).

Animal behaviorist and author Sally Blanchard notes that some parrots, including macaws, are “recreational biters” who view biting as part of their play.

This happens because macaws recognize they receive attention when they bite and so equate it to jumping around or vocalizing as just another way of “having fun” with their owner.

A macaw’s instinct is to fly away from stressors, so if their wings are clipped, they may be more likely to bite as their only means of dealing with a perceived threat.

You should consult your vet as to whether this controversial taming method is necessary for your macaw or not.

At around 12 months old, macaws approach their “bluffing stage” as they reach sexual maturity and experience teenage-like mood swings as hormones surge through their body.

This period usually lasts around 1-3 weeks and can see your macaw exhibit hissing, lunging, a disdain for being petted, and yes, biting behavior.

Your macaw may bite in defense of their cage (or “nest” as they view it).

This may be done in response to an unfamiliar person touching their cage or when their owner attempts to change food bowls, add/remove toys, clean the cage, etc.

For this reason, new owners are encouraged to remove their macaws before “invading” their personal space.

Different Types of Macaw Bites & What They Mean

Young macaws often nip or “beak” you to help them climb on to your hand and keep their balance.

Instinctually, newbie macaw handlers may flinch and pull their hand back, but this puts the bird off balance and may provoke them to nip harder out of confusion and stress.

If they continue to nip hard and are not reprimanded for it with a “No” or “Be gentle” command from an early age, your macaw may grow to think hard beaking is a form of play.

Try to nip nipping in the bud as early as possible with a good step-up technique! You’ll find the following clip quite useful when practicing.

Macaws will give you a warning bite if you have made them feel uneasy, i.e. approaching their “nest” to clean their cage or elicit play when they are tired.

Warning bites are intended to inflict pain but are unlikely to break the skin as macaws will purposefully not use their full force here, only greater pressure than a nip.

Only after sensing that all prior warning signs (which we’ll discuss later) have been ignored will macaws deliver a last resort “you asked for it” kind of bite.

This can be severe enough to require hospital treatment as macaws will use the full force of their beak to crush or rip at whatever they can latch onto.

Macaw bites can be very dangerous depending on the wound severity and the victim.

For instance, a bite may result in broken skin that will require disinfecting to kill bacteria from the bird’s saliva.

If this bacteria enters the bloodstream, victims can become infected with Psittacosis or “Parrot Fever.”

Reactions can be severe if left untreated, particularly in the elderly and those with weakened immune systems.

In the case of a true bite, the large, curved beaks of macaws can deliver a powerful blow in two main ways:

Are Macaws More Likely To Bite Their Owners or Other People?

While strangers can provoke a biting response in many under-socialized macaws, macaws and parrots in general are typically more likely to bite their owner and exhibit generally aggressive behavior towards their own “flock.”

A 2001 study of Yellow-naped Amazon parrot pairs by the University of California revealed that pairs showed greater aggression in response to hearing local vocalizations (or the “duets” of their kind) than when foreign parrot dialects were played to them.

Another behavioral trait thought to back this up is the fact that many macaws reportedly bite with redirected aggression.

In other words, a perceived rival or unwanted stimuli enters their space and they bite their owner because they are simply the closest target and outlet for their aggression. 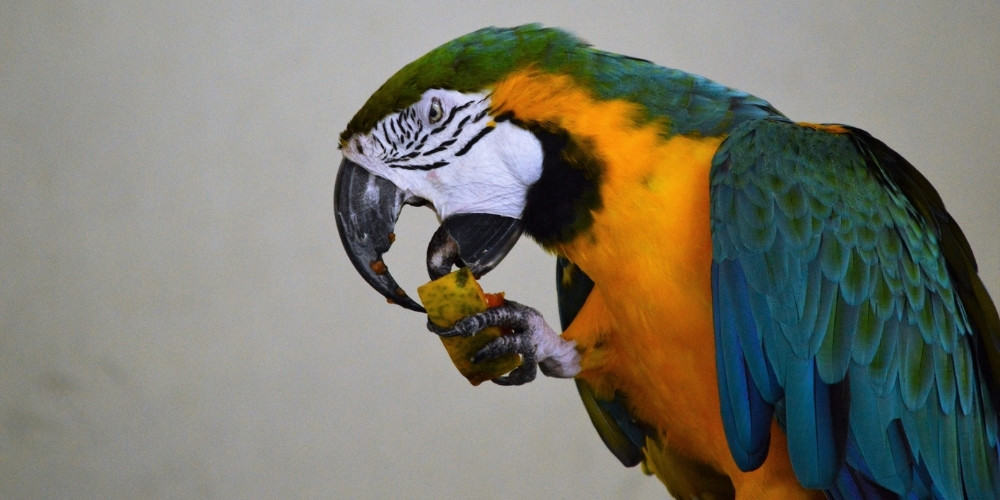 Can a Macaw Bite Off a Finger?

Larger macaws are capable of tearing off fingers if exerting the full pressure of a true bite as above-mentioned, which amounts to a bite force ranging between 400-700 psi (pounds per square inch).

Compare this with the average human bite force (120 psi), and you can understand how a macaw’s beak clamp-and-ripping motion could result in finger loss during a struggle.

How Badly Does a Macaw Bite Hurt?

Depending on whether the bite is a nipping action or a full-strength defensive bite, the pain felt by a macaw’s bite can range from mild bruising and pinching of the skin to deeper gashes and lacerations that require stitches.

In the extreme cases, fractured bones and nerve damage could result that require reconstructive surgery and physical therapy.

What To Do If a Macaw Bites You

The first thing you must do is remain calm.

As difficult as this may seem in the moment, screaming or yelling curses at your macaw could cause them to latch on tighter and turn a nip or pressure bite into a severe wound.

Responding angrily may also taint your macaw’s trust for you, prompting them to bite again in future.

Zoologist Frank Indiviglio recommends “covering their head with a towel, or turning on a nearby radio to distract them.”

How Do You Stop a Macaw From Biting?

While there are no guarantees, the following advice can definitely be a move in the right direction.

Should I Punish My Macaw for Biting?

No, you should never punish your macaw for biting, other than using stern vocal warnings and the “punishment” of depriving them of your company for a while.

Macaws are intelligent, emotionally attached birds and will not forget a physical or aggressively loud scalding.

Positive training techniques that build trust, not weaken it, can be effective in helping them distinguish good behavior from bad.

Warning Signs To Watch For

Keep a eye out for any of the following:

Which Macaw Delivers the Worst Bite?

The green-winged macaw is known to deliver the most powerful bite with a force of about 700 psi.

In the wild, this amount of pressure allows them to crack open tough palm nuts and other hard seeds with ease.

Bear in mind that green-winged macaws are difficult to hand-feed as youngsters, which may make biting more likely with improper care.

Macaws are not naturally aggressive, but they are stubborn and easily pick up bad habits in captivity.

As the founder of Avian Enrichment Deb White notes:

Aggressive biting is not a behavior that is commonly observed in the wild. Wild macaws can effectively communicate with their flock through body language and vocalizations.

White adds that because captive macaws cannot use flight to defend themselves in challenging situations, “aggressive behavior sometimes serves as their means of communication” with a human flock that can’t understand their needs.

Tips for a Better Relationship With Your Macaw

The following tips will help you gain a better understanding of your bird, which in turn leads to a closer relationship.

Recognize when they are receptive to interaction, and note when your macaw is in the mood for socializing.

This could be when you return from work or perhaps when they are most relaxed and satiated after a feed or nap.

Finding them at their best is less likely to result in stress or “I want solitude” warning bites.

Socialize them well and acclimatize them to out-of-cage life.

It’s important that your macaw interacts with you and their surroundings in a neutral setting, away from where they eat, sleep, and feel territorial.

Provide them with a T-stand perch in a separate room from their cage and take them outdoors with a harness (learn the pros and cons of harness training here) to let them spread their wings and meet new people.

Be Consistent in Training

Recognizing when they feel overwhelmed or prefer to be left alone i.e. during the “blushing stage” will help your macaw feel their needs are being understood.

Much like teenagers, macaws develop healthy boundaries when they receive gentle but consistent training.

In summary, macaws can inflict dangerous bites when thoroughly provoked, but they will typically warn handlers with lighter pressure bites beforehand.

There are multiple reasons why macaws bite, but many of these are captive-learned traits.

Owners can anticipate and prevent biting behavior by studying their body language and recognizing triggers.