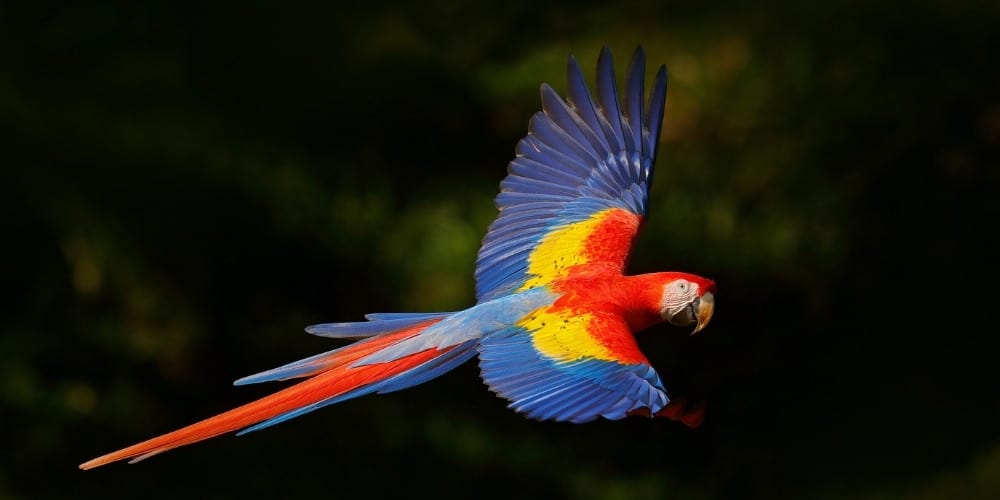 One glance at their dazzling plumage and its love at first sight for potential parrot owners.

However, as stunning as the scarlet macaw is, they are not mere ornaments, and they need the attention and care of a dedicated owner to help them thrive.

Do scarlet macaws make good pets? Scarlet macaws can make wonderful pets for those able to commit to several hours of interaction per day and provide a cage environment suited to both their size and intellect. Destructive habits can develop if they are neglected, so attention is non-negotiable with these tropical parrots.

The sheer size of these birds alone may not be appropriate for certain living arrangements and budgets.

For this and many more reasons, the decision to care for one cannot be made lightly.

From life in the wild to captive behaviors and needs, here’s your comprehensive guide to scarlet macaws.

Scarlet macaws possess red plumage on their head, body, and tips of their tail with yellow and blue feathers in their lower wings.

In contrast to their bright body coloring are a featherless patch of white skin, pale yellow eyes, and a large curved white upper beak and black mandible.

As adults, these majestic macaws measure 35 inches (2.9 feet) from head to tail and have an incredible 1 meter (3.3 feet) wingspan.

Adult scarlet macaws weigh 2.2 pounds (1 kilogram) on average, and their beautiful tails make up almost half their total length!

Scarlet macaws are highly sociable, fun-loving birds who crave attention from their owners.

They are also highly attuned to their caregiver’s emotions and tend to reflect happy or stressed moods.

Many can develop into stubborn one-person parrots without early socialization training.

Ian Tizard of the Exotic Bird Health Center in Texas describes scarlet macaws as “among the most intelligent of all birds” with a great “sensitivity to human emotions.”

They can distinguish shapes and colors and are good mimics when taught consistently.

Training can be accomplished with patience and positive reinforcement, though their skill for sensing fear and other negative emotions make them better suited to experienced parrot handlers.

Scarlet macaws tend to squawk often to get attention for food or play.

They also communicate in harsh screech calls when nervous or afraid as well as lower pitched growls when they’re stressed and agitated.

Scarlet macaws have a lifespan of around 40-50 years in the wild, but this can extend to 60+ years in captivity with proper care and a well-balanced diet.

Their predisposition to some health issues, such as lipomas, deficiencies, and psittacosis, may shorten a captive scarlet’s lifespan.

Their glorious colors price them at an steep $2,500 on average, but this can jump to $3,000+ depending on the breeding quality and hybrid color variety.

When you factor in their large cage and accessories, food, vet bills, etc., the annual cost to maintain a pet scarlet can reach upwards of $3,000-$4,000 a year in some cases.

You can view a breakdown of the estimated macaw prices here.

Scarlet Macaws in the Wild 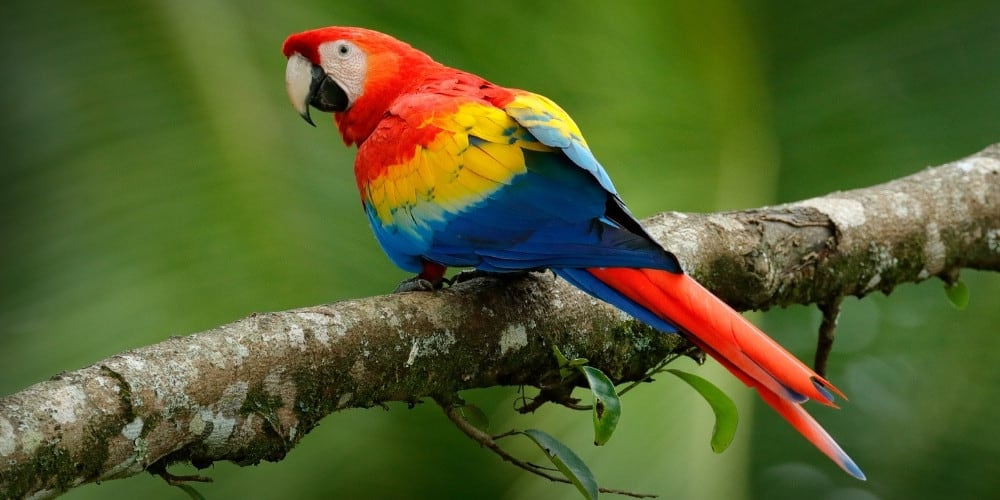 Scarlet macaws are native to the tropical regions of South and Central America, and their range can extend from the rain forests of southern Mexico to the Peruvian Amazon.

They prefer living in tall, deciduous trees in forests and woodland areas, and they can also be found near rivers.

According to the U.S. Fish and Wildlife Service, scarlet macaws have “a tolerance for degraded habitat,” and they can often be found nesting in the cavities of dead trees.

Wild scarlet macaws are herbivorous but are also classed as “granivores” due to their fondness for nuts and seeds.

They also feed on a wide range of ripe and unripe fruits, plants, and insects.

Due to the toxicity of some of their favorite fruits and plants, scarlets are often observed counteracting the poisonous effects by ingesting alkaline-heavy clay from the Amazon river basin.

Do Scarlet Macaws Mate for Life?

Once the chicks hatch, both scarlet parents take an equal role in raising their offspring for a full year before they flee the nest.

Scarlet pairs remain monogamous long after reproduction and live in large family groups of up to 30 individuals, sharing food and flying close to one another.

Adult scarlet macaws have natural predators like eagles and large jungle cats, such as jaguars, while macaw hatchlings are preyed upon by snakes, monkeys, and small birds.

While they maintain a foothold in South America, according to the U.S. Fish and Wildlife Service, scarlet macaws are sadly “endangered in much of Mexico, and central America, where only a few thousand scarlet macaws remain.”

Habitat loss due to rampant deforestation has been instrumental in their population decline, as has an increase in the illegal trapping and selling of macaws to the pet trade in recent decades.

How Many Scarlet Macaws Are Left in the Wild?

As of April 2021, there are an estimated 20,000-50,000 scarlet macaws left in the wild, which classifies them as a species of “least concern” according to the IUCN (International Union for the Conservation of Nature).

The habitat and poaching concerns threatening their future will see their status change dramatically unless conservation efforts are made to slow deforestation and re-introduce macaws into former territories.

Caring for a Scarlet Macaw: Requirements

Are Scarlet Macaws Good for Beginners?

Scarlet macaws are not recommended for beginners simply because their attention needs, stubborn nature, and sheer beak strength can be overwhelming to unseasoned handlers.

Like some human teenagers, macaws have a knack for exploiting weakness and pushing boundaries with a novice caretaker.

Scarlet macaws should be fed a wide range of fruit, vegetables, and high-quality pellet food which offers them a mixture of essential nutrients.

Due to high-fat content, nuts and seeds are best in moderation (a couple per day).

Foods you can safely feed to your scarlet macaw include:

Learn more about the ideal diet for a macaw, including what foods should never be offered, in our article “What Do Parrots Eat?“

To cater to their gigantic wingspan, scarlet macaws need a minimum cage size of 60” H x 36” W x 48” D. An outdoor aviary is also recommended if you have the space.

Inside their cage and aviary should be an assortment of branches, feeders, and puzzle toys to keep them active and stimulated.

Scarlet macaws can keep active in their cage as long as there are enough ladders, ropes, and swings to feed their inner acrobat.

Climbing and navigating obstacles daily in their cage helps to work major muscle groups, and providing them with toys that require exploration with their feet provides a great workout too.

As highly intelligent birds, scarlet macaws crave a stimulating environment, so do your best to replicate the variety of stimuli found in the wild.

This includes chewable branches, bells, colorful paper/cardboard for shredding, leather or wooden toys for destroying, and twig balls concealing food they must “forage” to access.

Try to rotate their cage toys every week to reduce boredom, and never underestimate the greatest form of mental stimulation – your company! (See below.)

You should ideally spend 1-2 hours per day interacting with your scarlet macaw.

I did some digging and, according to this forum poll, found that over 54% of macaw owners spend up to 5 hours a day with their birds.

Scarlet macaws can become aggressive and destructive when lonely, so they need to be involved in your day as much as possible.

This means talking/singing to them during feeds, socializing with them on a T-stand perch outside their cage (like this one on Amazon with bowls and a catch tray to reduce mess), and acclimatizing them to other people.

Scarlet macaws are loud pets, but their noise levels tend to reflect the noise of their environment.

For example, a large family household may see your macaw amp up their outbursts to match the excitable atmosphere.

Know that you cannot train them to completely stop their natural form of communication.

However, well-tamed scarlets learn to make less noise throughout the day with positive reinforcement training and enough cage toys to keep their beaks and minds busy.

Training a Scarlet Macaw: The Basics

Scarlet macaws are bigger squawkers than talkers, but they have demonstrated the potential to amass a vocabulary of up to 100 words.

A study into the lexicon of 131 parrots, including Amazon parrots, African greys, and cockatoos found that Macaws learned “10 or fewer words” over an 8-month period.

Yes, they are often dubbed “gentle giants” because they adore cuddles and play, but their friendly nature is dependent on the pillars of a stimulating cage environment and regular companionship.

Without this regular stimulation, boredom can breed behavioral issues (see below).

Their stubborn nature and strong attachment to owners can breed aggression if macaws are not adequately socialized from an early age.

This is because scarlet macaws are known to develop aversions to anyone besides their caregiver, so keeping them in a small social bubble may cause them to act aggressively towards other people in your home.

Possible Behavior Issues & What To Do

Macaws need a chewing outlet to keep their beaks strong and to relieve boredom, so without an ample supply of chewable goodies, they’ll go to town on your home furnishings.

(Check out this guide to keeping your furniture intact.)

Scarlet macaws can be overprotective of their cage environment as if it were their own nest and respond defensively when you approach them.

From an early age, you should routinely move your macaw to a neutral setting (a T-stand perch in a different room), clean their cage often and rotate toys and food routinely.

Scarlet macaws can turn their destruction inwards if they feel bored, stressed, or ill.

If your vet rules out a medical cause for feather-plucking, consider how enriching their cage is or whether a new cage mate, recent changes at home, or hormonal fluctuations could be influencing this behavior.

How To Train a Macaw Not To Bite

Initially, all macaws gently nip owners when learning to step up onto their hand.

To prevent them from associating all biting with acceptable communication, you must express a firm “No” command and ignore them for several minutes to demonstrate that biting doesn’t get attention.

If they are perched on you at the time, lower your arm to disorientate them slightly so they refocus on their balance.

Over time, they will link their biting behavior with this unpleasant jolting movement. Don’t forget to reward progress with treats and vocal praise.

(We have an entire article dedicated to macaw biting and how to deal with this problem. Check it out here.)

Crossing scarlet and other macaw species opens up a whole other level of beautiful color variations! Below are some of the most popular scarlet macaw hybrids:

Catalina Macaw – A cross between a scarlet and a blue-and-gold macaw, the catalina macaw has a burnt orange, almost golden chest with a dominant coloring of earthy greens and blues painted all over its back and wings.

Shamrock Macaw – as the name suggests, the shamrock macaw cross inherits most of its coloring from its green military macaw parent (named so due to its resemblance to British military uniform). The red coloration sets a fiery contrast in a sea of calming green tones.

Tropicana Macaw – This is a 2nd generation hybrid of the scarlet and harlequin macaw (a rainbow sub-breed in its own right). The result is a stunning ombré bleed of red into orange, yellow into green, and finally blue into purple-and-white plumage as you approach the tail feathers.

To summarize, scarlet macaws make loving pets for owners who can commit to hours of daily interaction and provide the space and equipment they need to thrive.

To ensure the best for pet and owner, these demanding birds will require experienced parrot handlers to deal with potential behavioral issues.