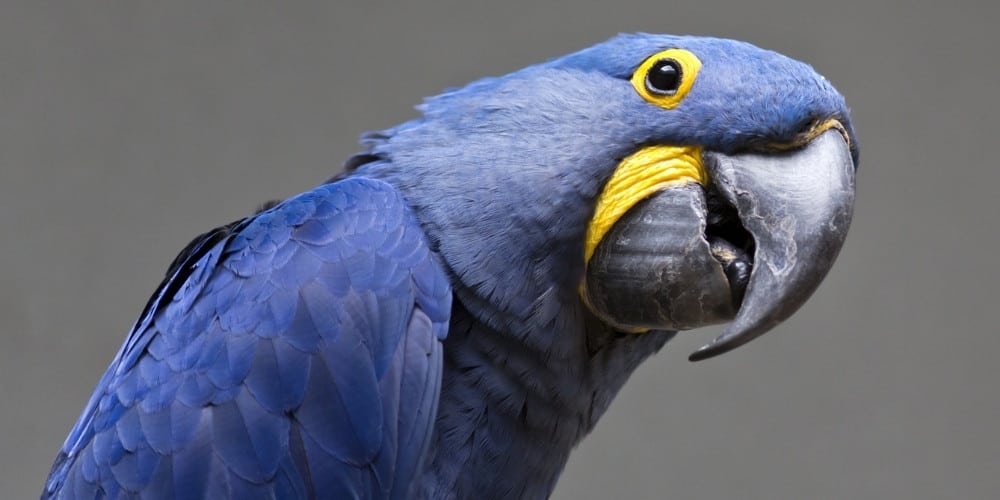 Hyacinth macaws are gorgeous and pricey pets that are vulnerable to extinction due to habitat loss and illegal trapping.

In captivity, these huge blue birds require a whole lot of special care and attention and aren’t great for first-time owners.

Is a hyacinth macaw a good pet? A hyacinth macaw can indeed be a great pet, but they are quite expensive and require an experienced owner and a considerable amount of time spent on their care. These highly intelligent parrots can be tamed and trained with relative ease and are often referred to as “gentle giants.”

In this article, we’ll give you a full run-down on the hyacinth macaw species with details about habitat, size, and diet both in the wild and in captivity.

Keep reading to learn more about the hyacinth macaw and to find out if this beautiful bird might be a good pet for you.

Here is a description and some general facts about the hyacinth macaw species.

The hyacinth macaw is by far the largest flying parrot species.

They have black beaks and feet, and their feathers are a gorgeous dark blue save for a small line of yellow around their eyes and below their beaks.

The blue feathers may be lighter around the back and grayish at the neck.

Full-grown hyacinth macaws are just over 3 feet tall and weigh between 2 and 4 pounds.

The hyacinth macaw is native to the swamps and woodlands of central and eastern South America.

They currently exist in three small populations: one in southwestern Brazil, one in eastern Bolivia, and one in northeastern Paraguay.

Hyacinth macaws are known as gentle giants. They tend to be calmer and less aggressive compared to other large macaws and will form strong bonds with their owners.

They are social creatures and love getting to know people.

They are intelligent enough to use tools in the wild and can be trained using positive reinforcement with treats.

With time and patience, you may even be able to train your hyacinth to stop any unwanted behaviors.

Hyacinth macaws’ high intelligence also means that they are great talkers. They speak in a variety of squawks but can also learn many human words.

Once they learn a word or phrase they like to repeat it over and over again. Some macaws can even understand the meaning of the words they’re saying.

It’s true! We expound on that fact in our article “Can Parrots Have a Conversation?” Be sure to check it out.

Hyacinth macaws are one of the most expensive pets you can buy.

Why Are Hyacinth Macaws So Expensive?

These birds are very rare species vulnerable to extinction, so their population is low, and their demand is high.

Many breeders prefer not to sell hyacinth macaws to the public because they want to eventually reintroduce the birds to the wild.

This makes the number of hyacinths for sale very low.

Is the Blue Macaw the Same as the Hyacinth Macaw?

The term “blue macaw” is sometimes used to refer to two different blue macaw species: the hyacinth macaw, and the Spix’s macaw, also known as the little blue macaw (learn more in our article here).

However, blue macaw is not a widely accepted name of the hyacinth macaw.

Hyacinth Macaws in the Wild 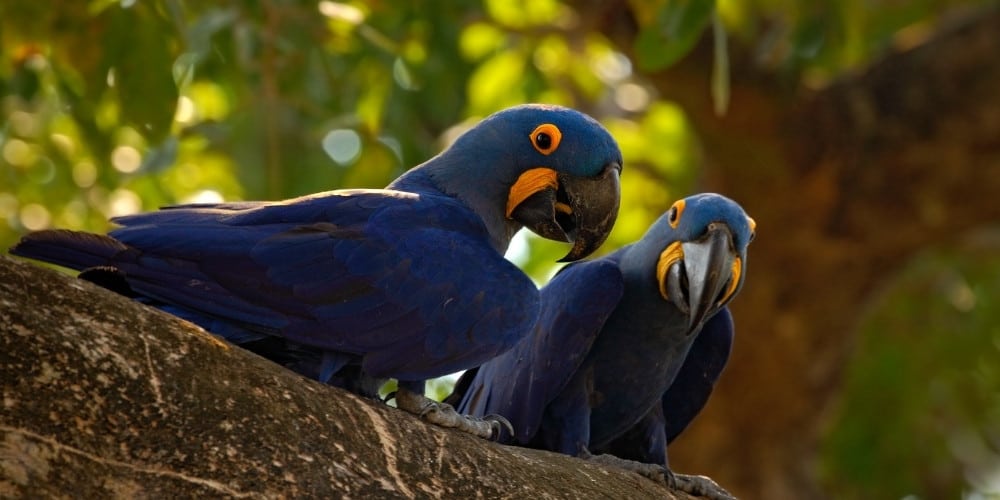 Before talking about hyacinth macaws as pets, let’s discuss their characteristics in the wild.

As opposed to rain forest climates preferred by many parrots, hyacinth macaws live in lightly forested, swampy areas and savannas.

They live in forests and swamp regions in areas of South America and prefer areas with lots of palm trees as this is their main source of food.

Hyacinth macaws in the wild have a diet consisting of palm nuts, fruits, seeds, and vegetables.

Their strong beaks allow them to eat species of palm nuts that are unavailable to other critters in the area.

Are Hyacinth Macaws Extinct in the Wild?

Macaws are not extinct in the wild, but they are considered a vulnerable species by the International Union for the Conservation of Nature.

This means that they are likely to become endangered soon. If their habitat is further diminished, they may become extinct in the near future.

How Many Hyacinth Macaws Are Left in the Wild?

As the agricultural industry grows in South America, what was once hyacinth macaw habitat has now been converted into farmland for cattle and crops.

Once the palm trees are cleared for farmland, the hyacinth macaws no longer have a food source, and the population dies out in that area.

Because hyacinth macaws are so valuable, some trappers steal them or their eggs from the wild for illegal sale.

It is unknown how many hyacinths have been stolen, but animal trafficking is a large issue in South America and is one that ultimately has contributed to the vulnerability of the hyacinth macaw populations.

However, predation is not considered a major threat to the hyacinth macaw population.

Caring for a Hyacinth Macaw: Requirements

If you wish to acquire a hyacinth macaw as a pet, you’ll need to do tons of research to ensure you can properly care for him or her.

Keep reading to see if you have the experience necessary to take care of a hyacinth macaw.

Is It Legal to Own a Hyacinth Macaw?

If you own a hyacinth macaw, try to emulate what their wild diet would consist of.

This means that hyacinth macaws in captivity should be fed a balance of pellets, fruit, vegetables, and lots of nuts.

The most widely available and healthy nut for captive hyacinths is the macadamia nut, which is very high in necessary carbohydrates and is similar to palm nuts the birds eat in the wild.

The care team at Texas Aviary & Exotic Hospital was kind enough to provide me with guidelines of foods to avoid, broken down as follows:

Probably Should Not Be Fed –

Can Be Fed With Caution –

Here is a basic list of what you’ll need if you purchase a hyacinth macaw:

You can see approximate prices for these necessary items in our article on the costs of owning a macaw.

Birds in the wild get tons of exercise flying many miles each day. In captivity, you should ensure your hyacinth is getting as much exercise as possible.

The hyacinth should have a large enough cage to fly around in and should be taken out of the cage daily to fly and explore around the house.

Hyacinth macaws are very intelligent birds that will get bored easily without enough mental stimulation.

Make sure to play with your bird daily. Toys and training are great ways to boost mental stimulation for your hyacinth macaw.

Hyacinth macaws should not be left alone for more than a few hours at a time.

Spend a few hours each day in the room with your macaw and at least an hour a day playing with or training your bird. 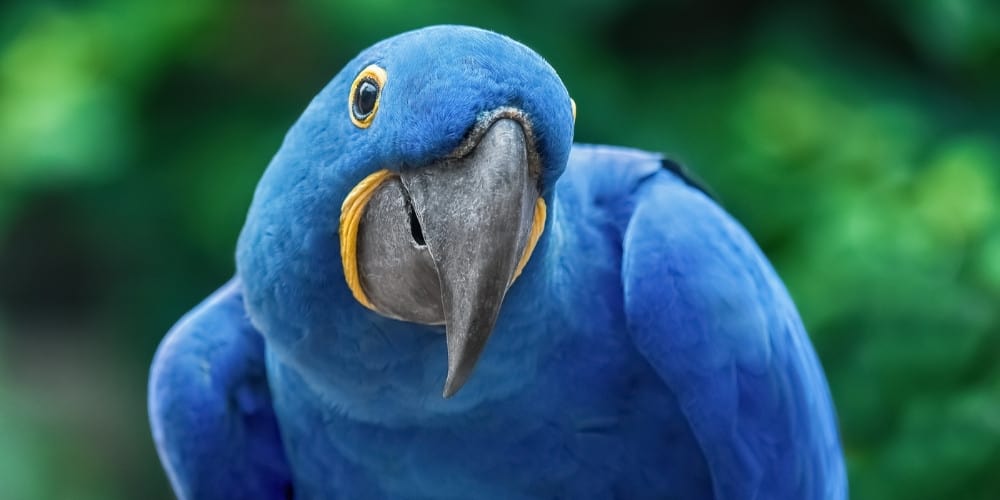 If you do decide to get a hyacinth macaw, you’ll need to know how to train them.

We’ll now go through some training tips as well as answer some very common questions about hyacinth macaw behavior.

Hyacinth macaws are very intelligent animals that are relatively easy to train.

Once tamed, you can start teaching your macaw some awesome and complicated tricks. Here are our top five training tips for hyacinth macaws:

Hyacinth macaws are not the most talkative parrots, but they can learn some words and phrases.

They are not known for speaking full sentences but love to repeat phrases like “peek-a-boo.”

You can teach your hyacinth macaw to talk by repeating a word or phrase over and over while making eye contact with the bird.

Once he or she decides to copy you, give your macaw a treat to positively reinforce the behavior.

Hyacinth macaws are generally more friendly and less aggressive compared to other parrots.

They are likely the friendliest of the larger parrots but can get nippy if they feel overwhelmed or threatened.

As long as you are caring for your bird properly and not overstimulating her, she will be very friendly towards you and your guests.

Hyacinth macaws can be dangerous if they decide to bite you.

They have an incredibly strong beak that exerts 200 pounds of pressure. This is enough to snap your finger off.

Most nipping done by hyacinth macaws is painless and playful, but if your bird is scared or feels threatened, he has the potential to cause serious injury with his beak.

Head over to this article to learn how to recognize warning signs and what to do to stop biting behavior.

Hyacinth macaws can be loud. They are known to screech and scream, and once you teach them a word, it may seem as if they never stop repeating it.

However, with proper care and training, you can get your bird to be a bit quieter.

The most notable behavioral problems in hyacinth macaws are caused by a lack of interaction.

Because hyacinth macaws are so intelligent, they can become very bored and upset if they are neglected.

The most common behavioral problems include:

Feather plucking is a very common behavioral problem in hyacinth macaws that also should be viewed as a huge red flag.

If your hyacinth macaw starts plucking his own feathers, you must increase stimulation and play with your parrot.

If the plucking continues, visit a veterinarian as this can also be a sign of a skin infection.

Hyacinth macaws have similar health issues as other macaw species.

They are prone to proventricular dilatation disease (wasting disease), which is a terminal neurological disorder.

If your pet is diagnosed with PDD, the symptoms can be treated, but the bird will eventually die.

Regular vet appointments are very important to ensure that your bird has no health conditions. If you ever notice symptoms of illness, take your macaw to the vet immediately.

Macaw species can be bred together in captivity to produce hybrids. Here are some common hyacinth macaw crosses:

However, extensive hyacinth macaw crossing can cause a bird to be unable to reproduce and is therefore not recommended due to the declining hyacinth population.

Should You Get a Hyacinth Macaw?

If you are a first-time bird owner, you should not get a hyacinth macaw. These birds are incredibly rare and require very specific needs and care.

You should only get a hyacinth macaw if you meet all of the following requirements:

If you are an experienced bird owner who has researched the hyacinth extensively and you wish to get a macaw, they can be sweet and beautiful pets that will love you right back.