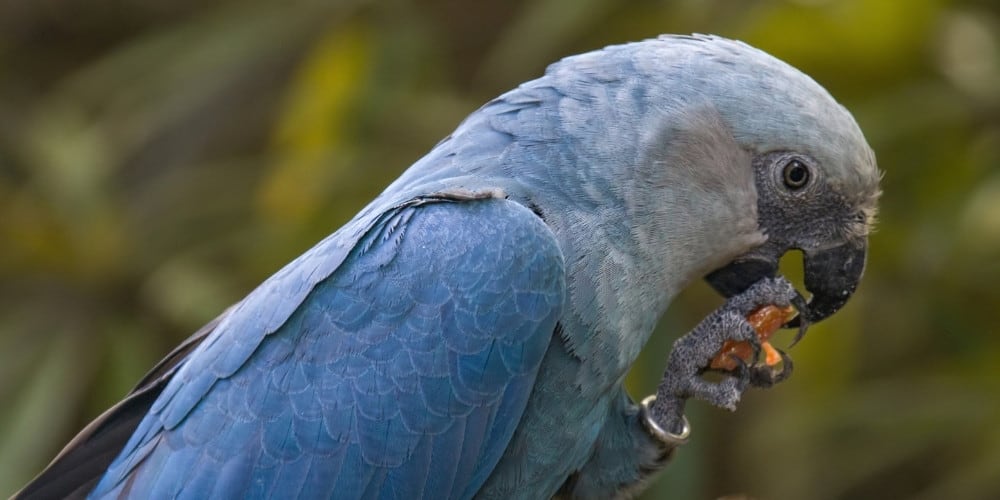 The Spix macaw is a medium-sized blue parrot native to semi-forested regions of Brazil.

Its population has been in decline since it was first officially discovered in the 1800s, and it has not been seen in the wild since 2000.

Is the Spix macaw extinct? The Spix macaw is extinct in the wild due to human interference and habitat loss, but around 200 birds are still currently living in captivity. There are plans in place for captive populations to eventually be reintroduced into their native Brazil once numbers increase.

In the following, we’ll give you an in-depth look at the general characteristics of the Spix macaw and go through the history of the species’ decline and the efforts that are being taken to save the bird from total extinction.

Keep reading to discover fun facts about the Spix macaw, how they became endangered, and what you can do to help them.

This striking bird, also known as the little blue macaw, is a sight to see but in serious danger of complete extinction.

Let’s go through some general facts about this rare bird.

The Spix macaw’s feathers are mostly blue. The bird has a gorgeous color gradient in its feathers blending from light blue at the head to dark blue on the feathers.

Some adults have gray around their heads, and these macaws have a patch of gray, featherless skin near their eyes.

This is a smaller macaw compared to some more common macaws like the blue-and-gold macaw, but it’s larger than a mini-macaw, such as the Hahn’s macaw.

Most full-grown Spix macaws are a bit less than 2 feet in length and weigh around half a pound.

While Spix macaws are illegal to keep as pets, they are known for being playful and entertaining.

They’re a very vocal species and can be aggressive if they feel threatened.

When approached they are typically timid and may be shy of their caretakers until they feel comfortable.

In the wild, these birds were known to follow a daily schedule of flying, feeding, and bathing.

They live and travel either in pairs or small groups and will hunt and nest with fellow Spix macaws.

Unlike many macaws who prefer jungle habitats, the Spix macaw is native to the arid regions of central and northeast Brazil.

They inhabited these sparsely forested areas as well as woodlands. Spix macaws nest in craibeira trees and lived in areas forested by these trees.

The trees often grow along river banks, and the birds enjoyed living near rivers and streams.

Spix macaws are herbivores that eat seeds, cacti, and fruits. In the wild, they relied especially on the seeds of the favela tree and the pinhao-brabo tree.

Diets in captivity attempt to simulate their wild diet by providing many kinds of fruits and seeds.

Their intelligence is demonstrated by the daily lifestyle and routine they kept while living in the wild, a skill that required the ability to perceive time and remember routes and places.

Spix macaws can talk. Due to their high intelligence, they are able to mimic human sounds like many other parrots.

However, since they are not kept as pets and are so rare, not much is known about their speaking abilities.

They are known, though, for very specific calls when flying and may also make these noises in captivity.

Unfortunately, this species is currently considered extinct in the wild due mostly to human alterations of their habitat and illegal trapping.

The good news is that the population in captivity is growing, and there are plans to reintroduce the birds into the wild.

Let’s look at their current endangered status as well as efforts to recover the population now. 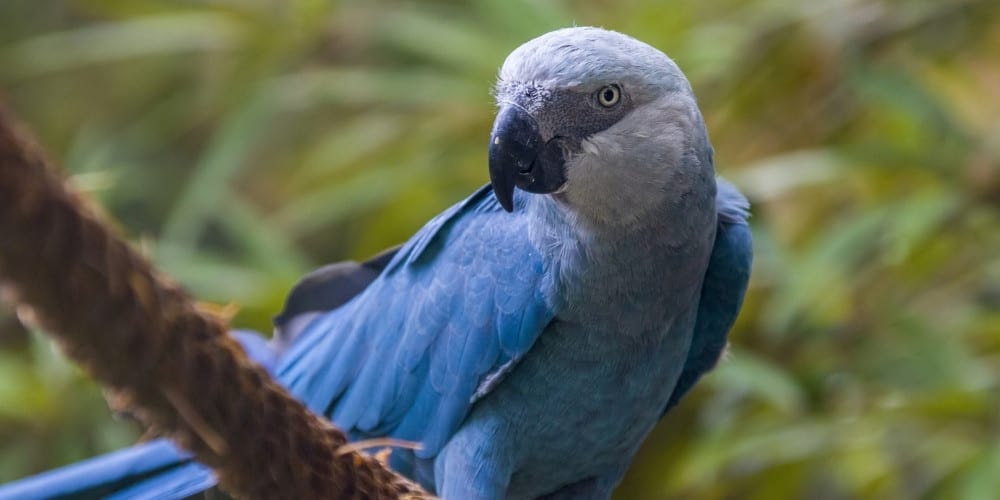 The Spix macaw is extinct in the wild due to habitat loss, illegal poaching, and invasive species.

The population has been in decline since it was discovered in the 1800s, but many conservation efforts are currently attempting to reintroduce the birds back to their native region.

How Close Are Spix Macaws to Extinction?

The Spix macaw has been classified as “extinct in the wild” by the International Union for Conservation of Nature since 2000.

This designation means that the only known living members of the species exist in captivity.

Most animals that are on this list, including the Spix macaw, are extinct in the wild due to habitat loss.

It’s estimated that there are around 200 captive Spix macaws remaining in the world.

Some uncertainty remains on whether the species is really extinct in the wild; however, whether they still exist in the wild or not, they are dangerously close to full extinction.

Captive Spix macaws are difficult to breed, and their numbers are in danger of dwindling.

If substantial measures are not taken to grow the Spix macaw population and reintroduce them into the wild, the species will go extinct, possibly within the next 50 years.

Why Are the Spix Macaws Endangered?

The Spix macaw is extinct in the wild due to rapid and widespread habitat loss, illegal poaching, and invasive predatory animals.

This macaw was not officially discovered until 1819, and by then its habitat had already diminished substantially due to burning, logging, and grazing in its native region.

Following the year it was discovered, these activities only increased.

By the 1980s the population had drastically dropped due to poaching and deforestation, when companies would come in and cut down lumber for sale.

Along with the increase in agricultural land leading to a loss in habitat, settlers from Europe brought over species of rats, cats, and mongooses that preyed on the macaws’ eggs and young.

The Spix macaw population declined due to a few main reasons:

Deforestation meant that the macaws had no place to roost, and their populations quickly died out in these areas.

Those that survived were preyed on by predatory species or trappers who wished to illegally sell the rare birds.

Sadly, invasive African bees also played a huge part in the decline of the species.

These bees colonized the same area in which the macaws were living and began to compete with the birds for nesting sites, sometimes killing the chicks and females, which led to a drastic decline in reproduction rates.

What’s Being Done To Save the Spix Macaw?

Because the Spix macaw’s population has been in decline for so long, the measures taken to conserve the species have been extensive.

However, by the time conservation efforts began in the 1980s, the species was already in danger of going extinct.

Brazilian conservationists decided that a captive breeding program was necessary to recover the population.

In captive breeding programs animals are raised in captivity until their population is large enough, and then they are reestablished into a designated spot with the correct habitat in the wild.

Since then, several committees have been established that dedicate themselves to reviving the macaw population, but lack of organization and reluctance of Spix owners to cooperate meant the numbers kept decreasing.

The birds in captivity have been expertly bred, and the population stands larger today than it did in the 1990s and early 2000s.

Some organizations in partnership with the Brazilian government have purchased an area in southwestern Brazil known as Caatinga, for the reintroduction of the species.

Reintroduction into the wild is a risky and expensive process, but there is definitely hope that the Spix’s macaw can be brought back to Brazil and establish a wild population in the near future.

The story of this beautiful species captivated me, so I continued digging. Here’s what I discovered.

In March 2020, 52 Spix macaws were relocated from the breeding facility in Germany to a newly constructed rehabilitation center in Caatinga, Brazil, their native home.

The birds will remain in the care facility until they have fully acclimated to the local climate and are prepared for life in the wild.

To help this group of Spix macaws achieve their goal of not only surviving but thriving in the wild and reestablishing the population, each bird has been paired with an Illiger’s macaw “buddy.”

Each parrot buddy will help their Spix partner learn how to find food, hide from predators, seek shelter, and more, thereby increasing the Spix’s chance of survival tremendously.

Why Are Spix Macaws Important?

Spix macaws are an extremely endangered bird whose population is at high risk for total extinction.

Spix macaws played an important role in their ecosystem, and their habitats are surely not the same without the birds.

These are gorgeous birds that have sadly been driven out by humans, and it’s our responsibility to try to bring the birds back.

Is the Spix Macaw the Rarest Macaw?

The Spix macaw is not only the rarest macaw, it’s also the rarest parrot. It’s considered completely extinct in the wild and only a few hundred remain in captivity.

Many macaw species have gone extinct due to the same reasons that the Spix macaw population declined, such as habitat loss and illegal poaching.

Here are some of the macaw species we know have gone extinct:

Although the Spix macaw is considered extinct in the wild, it still has captive populations.

If recovery efforts are prioritized, hopefully, the Spix won’t make it onto this list of extinct macaw species.

Can You Buy a Spix Macaw For a Pet?

No, you cannot buy a Spix macaw for a pet. Spix macaws are extinct in the wild, so they are one of the most protected bird species in the world.

Only trained and certified professionals are allowed to have Spix macaws, and their job is to help take care of and breed the macaws to hopefully establish a wild population again.

It is speculated that some private owners do have Spix macaws thanks to the illegal black market exotic animal trade industry.

Having a Spix macaw as a pet is illegal and is further endangering the future of the species. 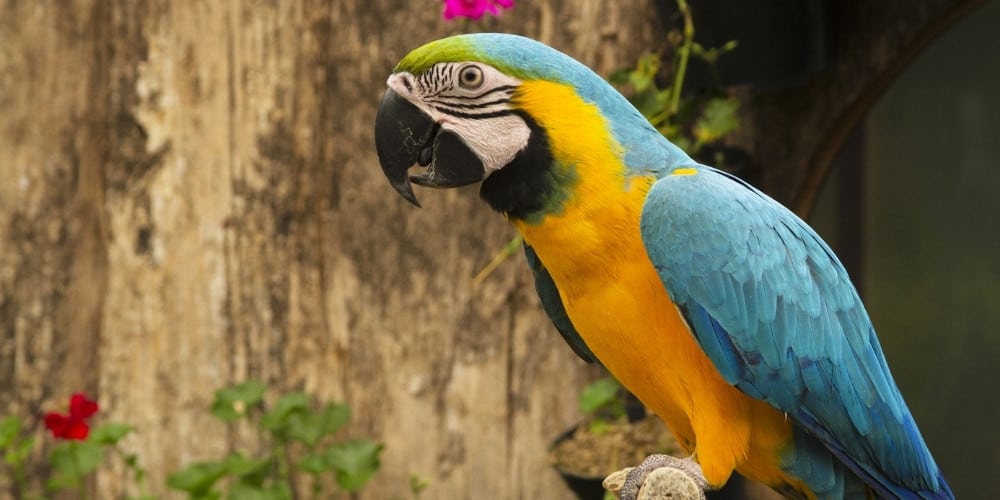 You can’t have a Spix macaw as a pet, but there are many other, very similar macaws that are legal (and fun) pets. Here’s a list of the macaws you can keep as pets:

How Many Types of Macaws Are There?

There are 19 known species of macaws, four of which are completely extinct, and one–the Spix macaw–is extinct in the wild.

In total, there are only 14 species of macaw known to be living in the wild today.

How To Save the Spix Macaw? How You Can Help

Conservation efforts today are aimed at reintroduction into the wild.

The process of raising, breeding, selecting a habitat, and reintroducing macaws is pricey and best left to the professionals.

Really the best thing we can do is donate to organizations like the Association For the Conservation of Threatened Parrots (ACTP), which is working with the Brazilian government to reintroduce the Spix macaw back to the wild.

Without funding, these organizations will not be able to successfully re-establish a wild Spix population.

The Spix macaw is a beautiful and intelligent species that is in danger of extinction with around only 200 surviving members.

Its native habitats have been compromised by deforestation and invasive species, and its populations have been stolen from their land for sale.

Many efforts have been taken since the 1980s to recover the population, and hopefully, in the near future, the Spix macaws can be taken back to their native habitats.